When Amazon first introduced its “drop-in” feature back in 2017, the reaction to it was mixed. While some appreciated the feature as convenient and novel, many were concerned about it being a security or privacy issue.

This feature allows the users to establish a broadcasting system in the house and comes in handy when you don’t want to go to the other side of the house to tell something to your family member and can use the Alexa device to broadcast your voice instead.

Using the Alexa drop-in feature, you can join conversations without being physically present.

While this is a very convenient feature, it also poses the possibility of someone listening in on your conversation through an Alexa device near you. But is that possible without you knowing? Let us find out.

Can you drop in on Alexa without them knowing? 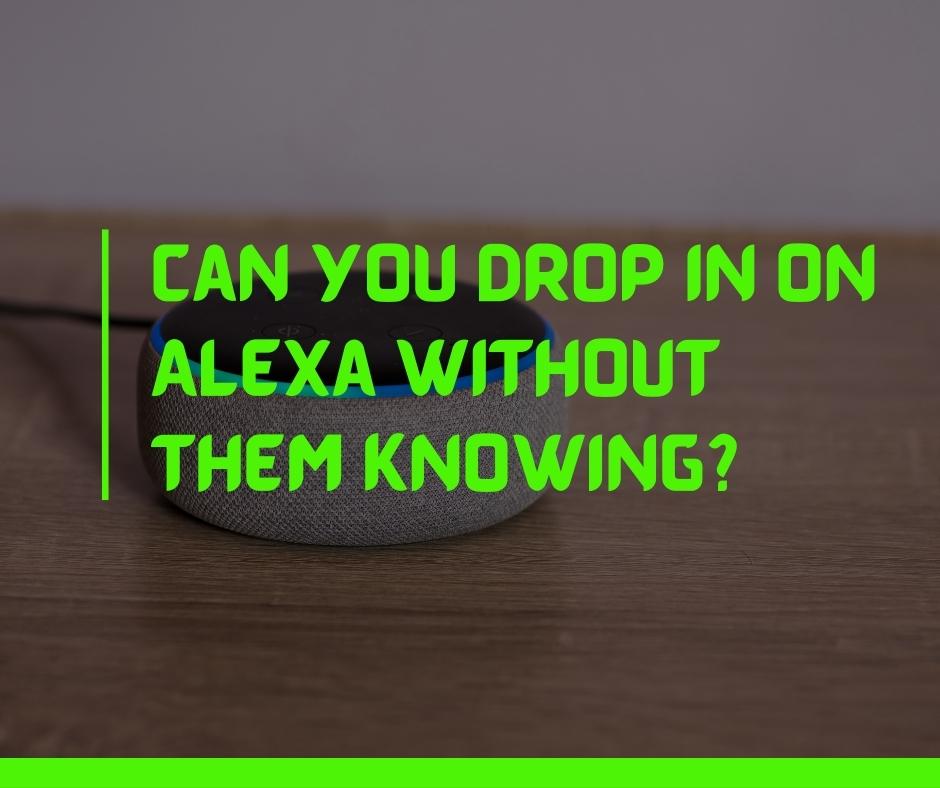 Another way to frame the question is whether or not someone can silently eavesdrop with Alexa on a private conversation without the people knowing that their voices are being transmitted via the Alexa device.

No, they cannot. Eavesdropping with an Alexa device, while is a logical possibility but if you really think about it, it will take extreme negligence or absent-mindedness to not notice the flashes and beeps that every Alexa device is programmed to make whenever it is being dropped in on.

Yes, that is right. Whenever you use Alexa to remotely drop in on another Alexa device, it will make a distinct beep sound and continuously flash a green light for as long as the drop-in continues. Both of these cannot be disabled or turned off and are default features.

So, unless one is unaware of the drop-in feature or completely zoned out so as to not notice the beeping and flashing, it is almost impossible to silently eavesdrop using the Alexa drop-in feature.

What is drop-in on Alexa? 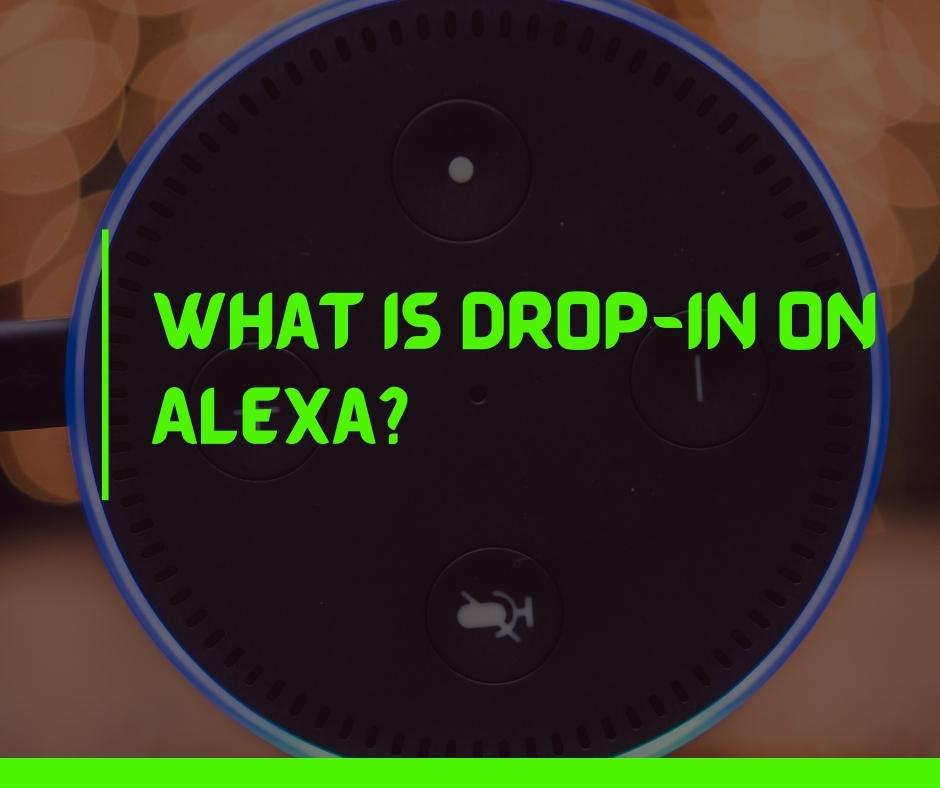 Using the Alexa drop-in feature you can basically create an intercom, allowing you to connect with other Alexa-enabled devices. You can apply this to the devices inside your home as well as devices that are located far away from you, but the owner of that device has to give your permission to do so using their device settings.

Once the drop-in feature is enabled, you can use your device to listen to any sounds, or conversations happening near the Alexa device that you are dropping in on. The people on the other end can also use their device to communicate back with you by talking into the device.

If you are a work-from-home professional and need a quiet house for an important meeting but discover that the TV in the living room is being played out too loud, you can just drop in on the Echo dot in the living room to ask the person to lower the TV volume. This is just one scenario, there are countless others where this feature serves very convenient purposes.

How does drop-in work on Alexa?

The first thing that will happen when you use your Alexa device to drop in on another device, the other device will emit a short distinct ring. This lasts for 3 seconds at the most. After this, the device will start flashing a green light. In an echo dot, this green light will be in the form of a ring on the top part of the device.

How to use Alexa Drop-in?

The process to use Alexa drop-in is actually quite simple. It has been broken down into steps for you.

Well, the first step is of course to get the app if you don’t already have it. Depending on whether you have an Android phone or iOS, you will get the Amazon Alexa app from the Google play store or Apple App Store respectively. Download and install it.

Set the app up

This is a standard app procedure that you are probably familiar with. When opening the installed app you will be asked to be given access to your phone’s contacts, location, and such.

After this, you have to set up your account. If you already have an Amazon shopping account or a Prime account, you can log in using those credentials. Amazon allows the same account across all of its services to reduce confusion between users. But this does not mean that you have to have a Prime account to get Alexa.

Just having an amazon account, free of cost, is enough.

Now you will be choosing the device you will use the drop-in feature on. You can go to the settings option in the App and choose the device. This is of course possible only after you already have an Alexa device such as an Echo dot.

This is an optional step that you can follow to avoid confusion in case there are multiple Alexa devices inside your home or if your neighbors too have similar devices. When you try to drop in, these devices will show a series of model numbers and names, and choosing the right one can get confusing.

So you can just differentiate between the devices by naming them. You can name it by the person who carries it or by the area of the house it is located in, such as kitchen, kid’s bedroom etc.

Once the name of the device you want to drop in shows up on the screen, tap on it and it will send an Echo show in the desired device indicating that you are using the drop feature on it.

This too is an optional step that you may or may not follow. There is an additional option to list your devices under “My Household”. This will mean that a list of devices belongs to our household and if you enable the “my household only” option then there will be no possibility of outsiders connecting to your devices.

You can drop in on Alexa even if it is carried outside your household as long as the one carrying the device gives you permission to do so.

After this initial setup procedure is completed, you can use voice commands such as “Alexa drop-in on the living room” without having to manually do it.

Does Alexa make a noise when you drop in? 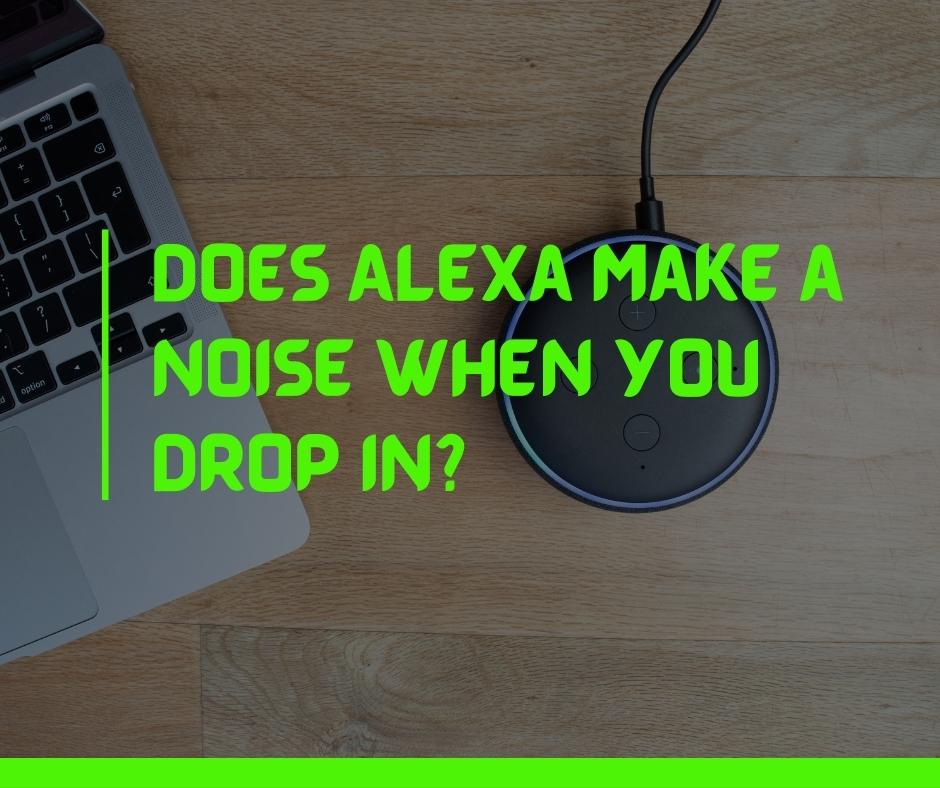 Yes, Alexa does make a distinct sound when you drop in on any device. The sound resembles a light ringing and lasts for two to three seconds. After this sound is made, the device will start flashing green light for as long as the drop-in continues.

This whole ring and flash are called an echo show, the purpose of which is to alert strangers to the fact that the device is listening at that moment. While the volume of the ring can be adjusted, the brightness of the green flashing light cannot be adjusted and both of these cannot be turned off or disabled.

How to drop in on Alexa without notification? 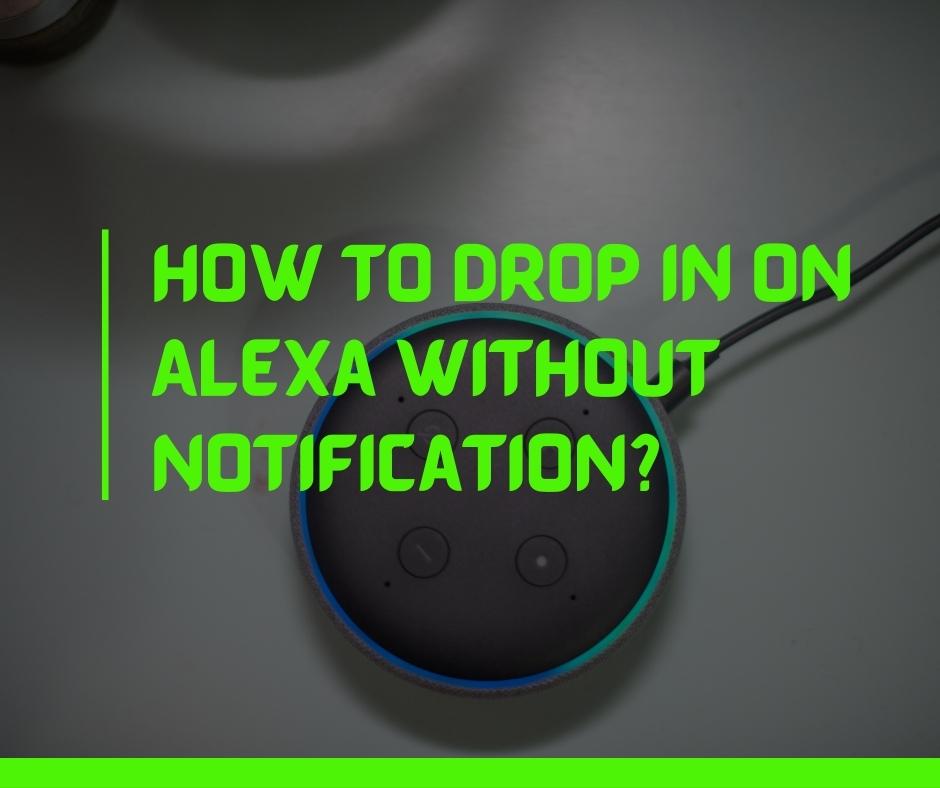 No, you cannot do it and that is of course because of privacy reasons. There are some understandable reasons for wanting to drop in without alerting the one near the device such as trying to check whether your kids have really gone to bed or if they are still talking to someone on their phone or playing with each other.

But think about it, if the feature to disable a notification or alert while dropping in is allowed, it will very well lead to shady and creepy people literally spying on other people, which will be a huge privacy threat.

The only thing you can do if you do not wish to startle the one on the other side is to set a routine that sets the volume to zero, waits a few seconds, and then gradually increases it. This will ensure that the moment you drop in, the alert sound will be at the lowest volume possible and slowly go up.

When you drop in on Alexa can they hear you?

To answer it simply, yes they can hear you. The moment your phone is connected to an Alexa device using the drop-in feature, it will emit a ringing sound and then a green flash.

And this will continue for as long as the Alexa device is being dropped in on. So yes, the person on the other end will definitely hear and know that the device is listening.

However, there are scenarios such as a person being engrossed in something in which case, one might not notice that the Alexa device is beeping and alerting them to the enabled drop-in mode. But in this situation, the fault does not lie with Alexa or the Alexa device.

How do you know if someone is dropping in on Alexa?

When you drop in on Alexa or if your Alexa device is being dropped in on, you will know it when you see the device emit a ringing sound and then a green flashing light and this will be on for as long as the drop-in continues.

What happens when you drop in on Alexa?

When you use the drop-in feature on Alexa, it establishes a connection between two Alexa-enabled devices, for example between your phone and an echo dot. With this connection, the two devices will act as an intercom between which you can communicate without being physically present in front of the person.

This is similar to calling someone, but what sets it apart is that it does not need a subscription to a telecom network and one does not need to accept the drop-in every time for you to be able to broadcast your voice to them.

What makes the drop-in feature different from the broadcast feature is that by using drop-in, both connected devices can be used to communicate. This means that both the devices will receive and send audio signals to each other. While the broadcast feature will only help you transmit your voice one way and does not leave room for the audio signals from the other end to be communicated.

How to turn off drop-in on Alexa? 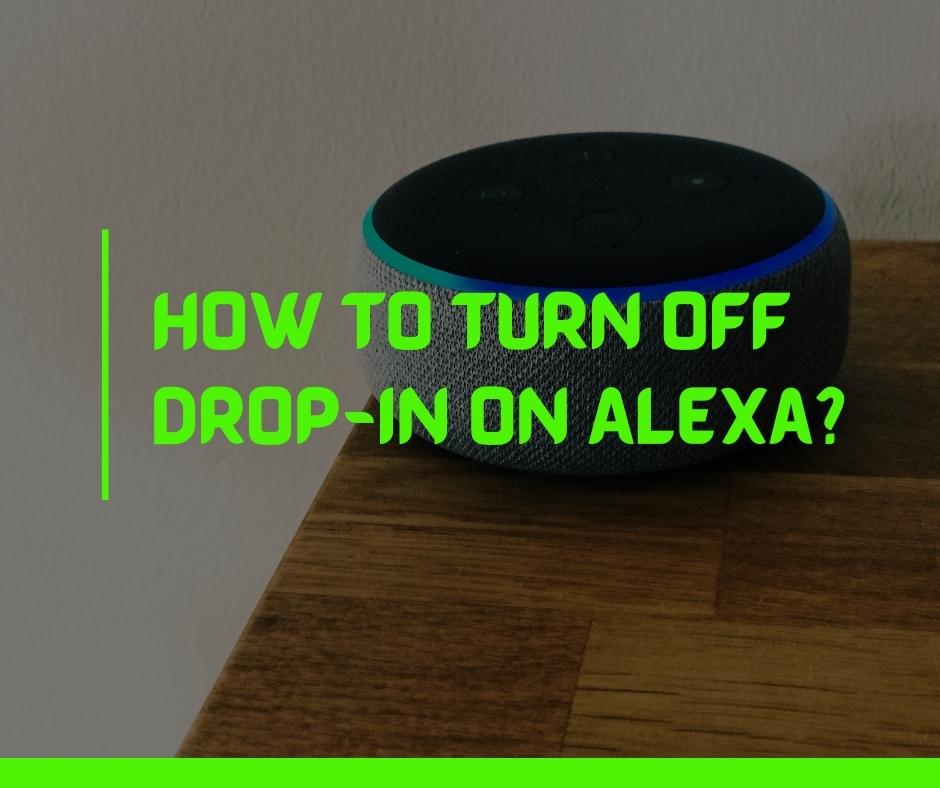 The good thing is that this feature is not a mandatory one and can be disabled easily.

Like every other technology, drop-in also has its pros and cons. The question of security threat only occurs due to persons with questionable morality. However, this in no way reduces how useful this feature can prove to be!