Sound is an energy that is produced through vibration. Waves of sound are generated by these vibrations, which travel through the air, water, and wood. When an object vibrates, it causes motion in the particles in the medium. This motion is called sound waves and continues until the energy of the particles is exhausted.

Sound travels until it is deflected by contact with another surface, such as a wall. When in touch with a hard surface, many sound waves are reflected, and the waves continue to move in a new direction at low energy.

Low-frequency sounds travel more through contact because they generate more energy and vibration. 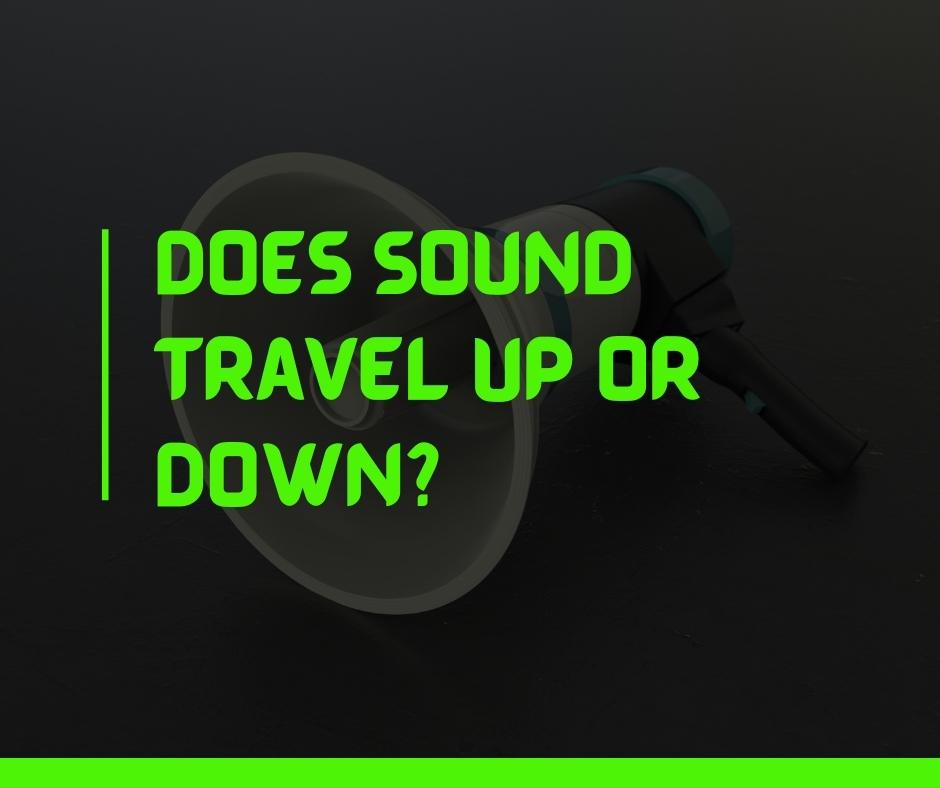 Does sound travel up or down?

Sound travels up and down in two directions, and sound is omnidirectional. Which means it can travel in any order. However, certain aspects affect the direction of the sound. Another factor influencing the movement of sound is the medium through which sound travels.

Sound is omnidirectional, and it traverses from the point of its origin to all directions, either in the form of waves or backpropagation. Sound can be heard from all points, but its intensity depends on what material it travels through. The speed of sound also varies on the medium of its travel and the inertial or non-inertial frame it is part of.

Does sound move in all directions?

The shape of the sound waves, which is unobstructed along the way, is approximately spherical, and when viewed from an infinite distance, sound waves can be seen as a plane wavefront.

In addition to the propagation, sound waves also have back propagations with weaker amplitudes. Sound waves travel in all directions at the same speed and form crests and troughs along their way.

It has been proved that the speed of sound is proportional to the temperature of the medium through various experiments. For every degree increase in the surrounding temperature in the air, there is an increase of about .61 meters per second.

Since the earth is generally warmer than the upper atmosphere, the temperature of the air decreases with altitude in the troposphere. This gradient decrease in temperature can be seen throughout the layers of the atmosphere. Since the speed of sound increases with the temperature, when sound travel upwards, it has to go through a medium of air that gets gradually colder than before.

Since the air gets colder the higher you go, the sound velocity decreases than at the earth’s low ranges. Therefore, we can say the sound will gradually slow down if it’s moving upwards.

How does sound travel through an apartment?

Once a sound is created on the floor, it travels from the floor to the connecting walls. From there, the vibration spreads in all directions. Usually, the floor and walls are made of different materials that transmit sound at different speeds.

Sound travels equally in both directions through the apartment building. However, the lower floors are noisier than the upper floors, and this is because more noise is made on the floors of the upper apartments.

Does sound travel upstairs or downstairs?

Ordinary sounds like walking and talking are not heard. Usually, a hard concrete floor will separate you from the people below. This floor transmits sound well from contact, but it does not travel well on the walls because it is wood. You can hear footsteps above your head, but your neighbors upstairs do not listen to you walking.

However, if you live in an apartment with a low STC rating and low noise cancellation properties. It can get quite noisy as you can hear loud noises from your neighbors, the thudding from upstairs, and even the vibrations of the wall-mounted appliances or speakers.

Does road noise travel up?

The sound travels equally in all directions, not in any direction unless intentionally directed. Then there are the brick walls and concrete and the roads that reflect the sounds well. For example, cars traveling on major roads and traffic noise get reflected in the surrounding buildings and roads.

You can get rid of or prevent, to an extent, the airborne noise by soundproofing your home/apartment. But, when impact noise is involved, you have to think about adding more mass to the walls or physically separating the outer wall and the inner wall to cut off the vibrations from ever reaching your home.

It moves faster downhill as it jumps up and down the cliffs. When descending, it should travel only through the air. Also, the speed of sound will be affected by the pressure of the medium through which it travels.

Also, there is the concern of decreasing temperature when going downhill, which was discussed earlier. As we go uphill, the temperature of the air is bound to drop, and hence the speed of sound through it is going to be slower than going downhill.

Unless something is blocking or diverting, the sound will spread in all directions.

It can travel at various speeds through various media, such as air or solids, but sound waves will continue to expand equally in all directions unless they are interfered with in some way.