One of the ways to start a portable generator is by pulling its pull cord. Hardly there are generators that can be started with a remote or switch or key.

When the pull cord is operating normally, it is expected to come out when pulled outwards and retract back when released. The pull cord retracts because of a recoil spring wounded around the pulley on its lower side.

If you are going through a similar issue, you have come to the right place! 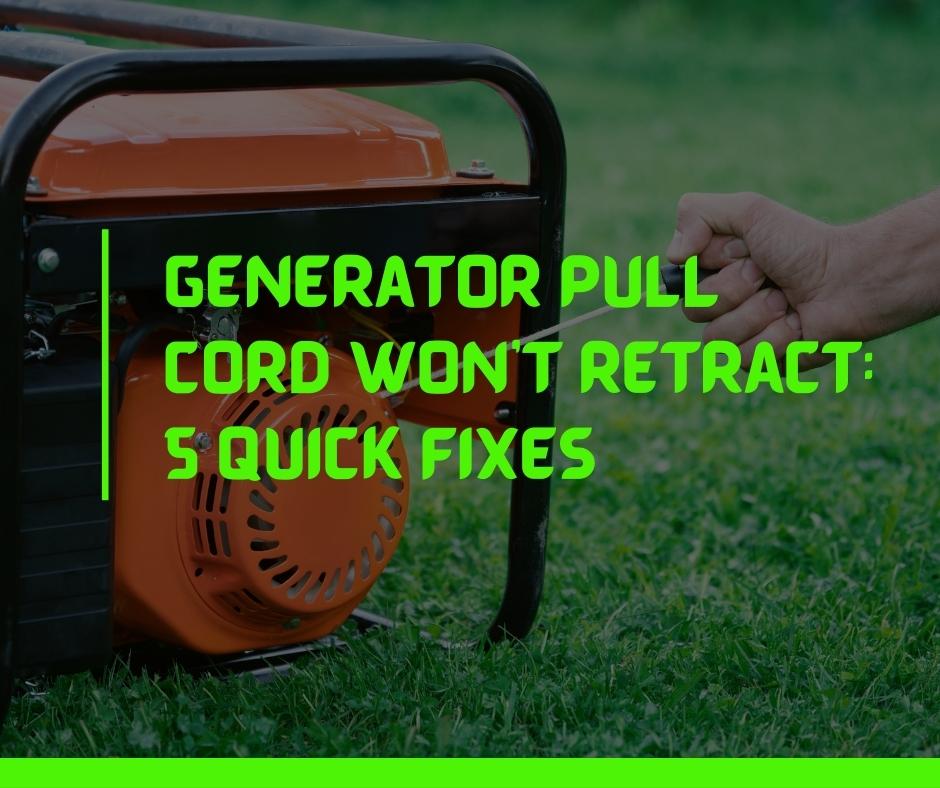 This guide examines the various causes that lead to such a situation and how to fix it. Without delaying any further, let’s go know what leads to a  generator pull cord locked.

Why is my pull start locked?

Remember, this issue isn’t likely to happen with a new generator.

The pull cord fails to retract usually due to wear and tear of the machine parts. 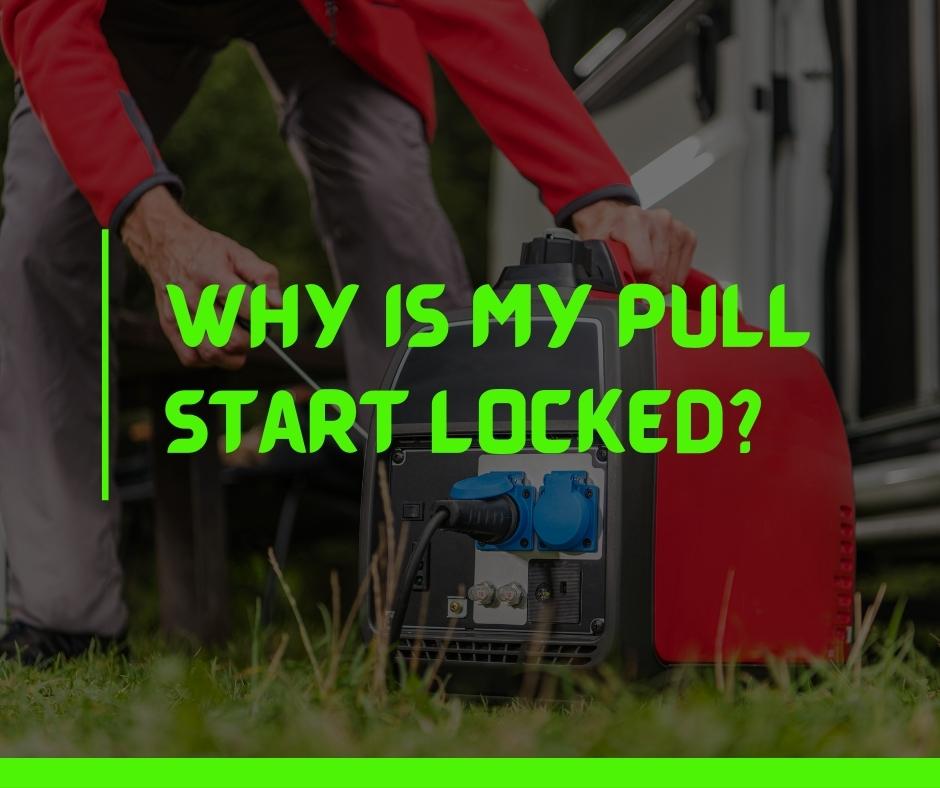 Let’s go through the various reasons one by one below:

Problems with the pull cord

Though most generators use a pull cord of high quality, it’s prone to wear and tear over time. When it’s used repeatedly, the friction that occurs against the surface of the pulley wears it out.

Is your generator pull cord stuck? Sometimes the pull cord forms a knot, preventing it from being stretched fully or from retracting to its original form. In that case, unknot the pull cord and see if it retracts properly.

Sometimes, the spring loses its tension, it gets worn out, stuck, or breaks after being used for a prolonged period. In any of these cases, the spring would fail to function properly, and therefore, the pull cord wouldn’t retract into the starter immediately after it’s released.

Sometimes, the recoil spring comes off from the pulley. If that’s the case, it can be fixed immediately. But, if you notice that a large portion of the pull cord is remaining out, while a little portion is getting wounded around the pulley, upon releasing the pull cord, it means the spring is losing its tension slowly.

This is a rare occurrence but if none of the above-mentioned reasons have occurred, you must consider this as a cause of why your generator pull cord won’t retract.

Sometimes the piston gets seized up. This could be due to various reasons. For instance, if the generator runs for a long time without sufficient oil, or if the piston isn’t lubricated properly, it gets seized up.

If the reason behind your pull cord not retracting is a seized-up piston, pour sufficient oil into the engine and the combustion oil and let it sit for some time.

After about an hour, stretch out the pull recoil spring and the spark plug to see the position of the piston, after adding oil.

You must have noticed that some models of generators use clutches and not spring-loaded pawls.  When you have a clutch, it means there are ball bearings present to enable it to remain free and move in any direction.

Now, sometimes this clutch gets stuck while moving. When this happens, the pull cord also gets stuck inside the pulley.

How to fix a pull start that won’t retract 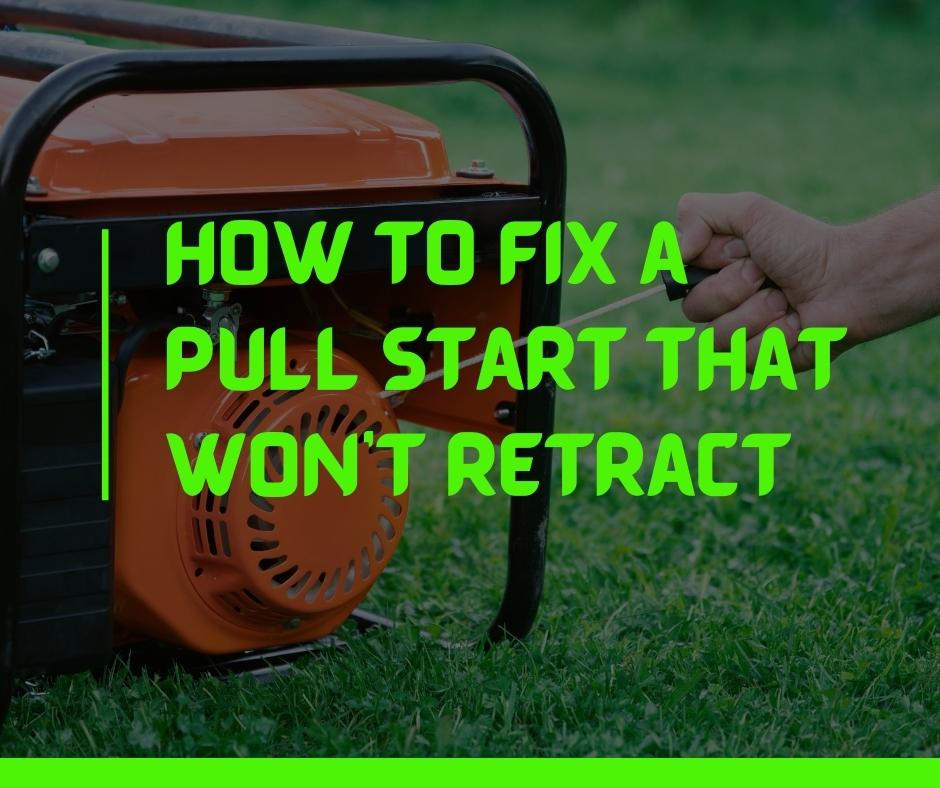 Whenever you notice your generator pull cord won’t retract, inspect the pulley first.  Start by taking out the starter and see if there’s any damage on the surface. If you see the pulley has cracks or is broken, it’s time to replace it with another one.  For that, follow the following steps:

Inspect the condition of the pull cord

If the pull cord is tangled, you can unknot it. But if it’s old and frayed in some places, it’s time to replace the old pull cord with a new one. For that follow the following steps:

If the recoil spring is broken, you will need a new one. While installing a new one, make sure to place it properly in the hooks to prevent it from coming out again.

In this way, the new spring is expected to work fine. While buying a new spring make sure you buy a good quality one otherwise it will lose its tension soon.

Inspect the condition of the friction plate

To examine the friction plate,  you must remove the starter. If you see it’s broken, remove it right away and place a new one.  If it’s not entirely broken, try pulling the rope and see how the various parts of the pulley system are behaving. While doing so, if there are weird grinding noises produced, it means the plate is worn out.

To remove the broken plate, you will have to remove the center bolt and then the cap. After replacing the friction plate with a new one, see if the cord flows freely before you fit the other parts of the system in place.

Sometimes dirt and debris inside the pulley system also keep the pull cord stuck. While inspecting the system, if you find dirt or debris, use a soft brush to clean it.

At times, the clutch gets broken or stuck. In that case, follow the steps mentioned below:

Generator Won’t Stay Running: 9 Quick Fixes
How to Fix an Overloaded Generator
How To Make Your Generator Quiet As A Cricket

These steps are expected to fix the issue and allow your generator pull cord to retract when released.

So the next time you see the generator pull cord not retracting, do not panic. You already know the causes that can lead to such a situation.

Find out the cause and follow the appropriate measures to fix it. We however advise homeowners to call a professional and allow him to inspect the issue.