Portable generators are most essential when there’s a power outage. In such emergencies, it’s frustrating to see your generator turning off frequently after it is turned on.

This can occur due to a variety of reasons. Overloading is the chief cause of this issue. However, other causes might also prevent a generator from running smoothly.

For instance, a blocked carburetor, bad exhaust, sensor failure, or battery issues can affect the functioning of the generator. When these causes remain unchecked, the generator fails to run smoothly and tends to turn off after a few minutes of its start.

If you are facing a similar issue or you have a generator at home, this guide is for you. We have listed all the possible reasons because of which a generator won’t stay running. 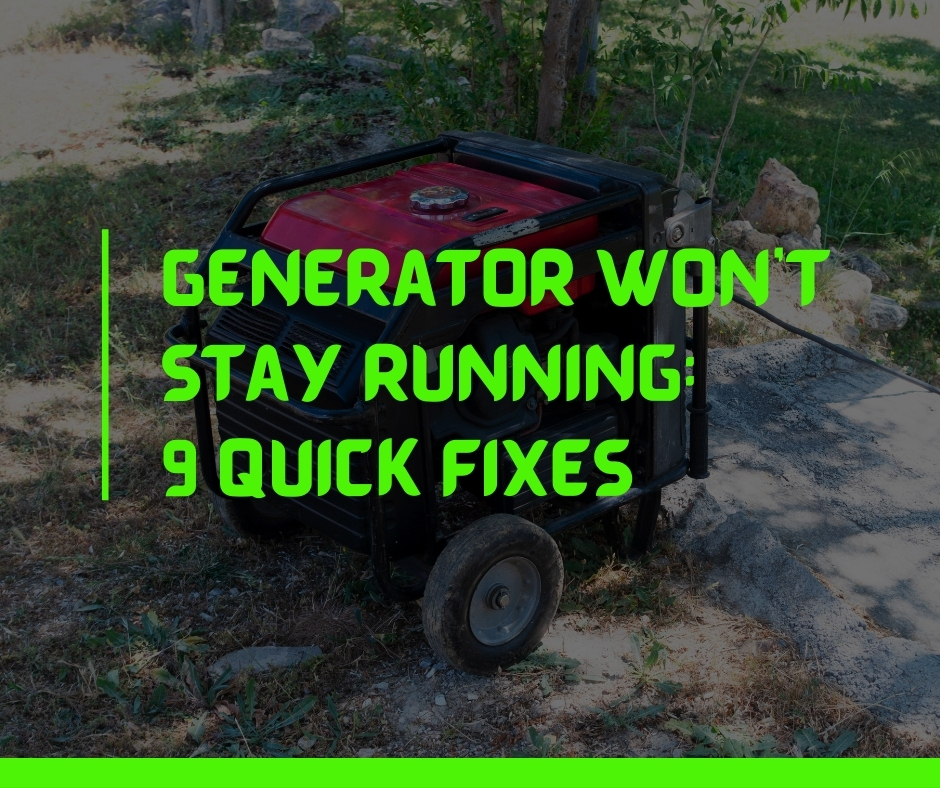 You need to identify the cause of the issue and fix it as directed in a later section of this guide. So, without any further delays, let’s first know the various reasons that affect the smooth functioning of a generator.

Why does my generator keep shutting off?

Are you wondering why your generator won’t stay running for more than a few seconds when started?

Here is a list of reasons that can be the answer to your question. 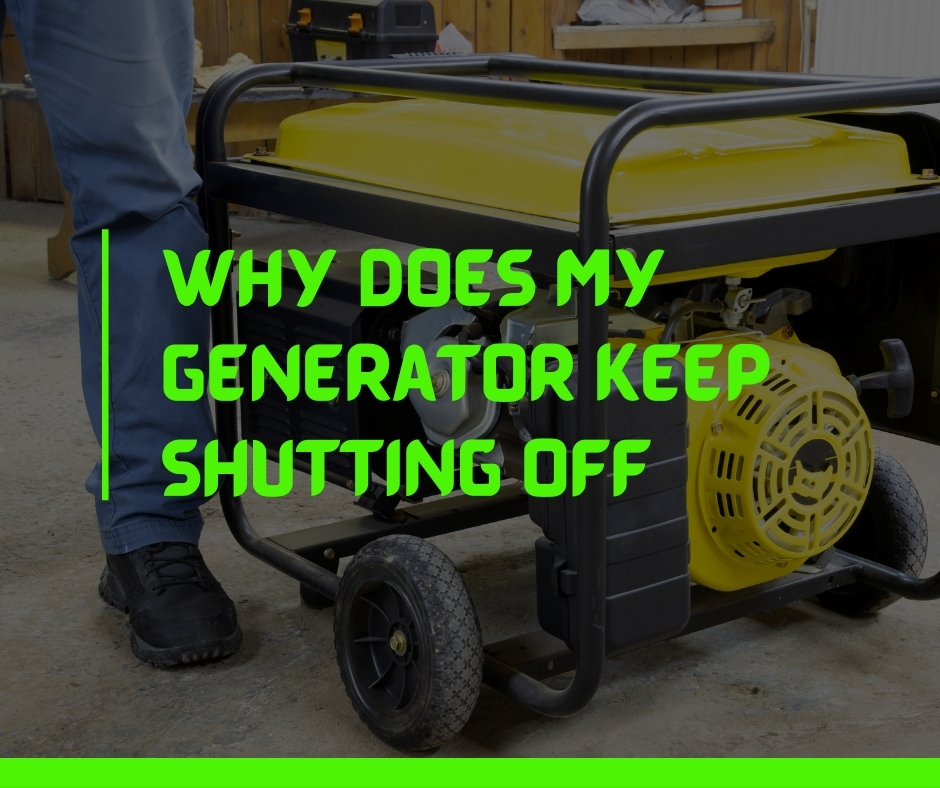 Your generator runs and then shuts off? Probably it’s because of power overload. If yours is an old generator, overloading is likely to occur because old generators weren’t designed to detect overload and shut down power accordingly. This feature can be found in the latest models though.

Modern-day generators can detect power overload. Whenever such a situation occurs, they shut down, preventing a major accident.  Overloading occurs when you connect multiple appliances to the generator and its rated wattage exceeds.

When the generator operates, fuel from the tank flows into the carburetor and other parts of the generator engine. While the fuel flows out of the tank, there is a space created that is occupied by air. This air clogs up the fuel cap over a period. A generator refuses to stay running when the fuel caps are clogged.

The purpose of the carburetor is to convert fuel into electricity. When the generator operates, gasoline-like ethanol attracts moisture. Over time, this moisture tends to corrode the inside of the carburetor. It also corrodes the fuel tank if neglected.

Have you been noticing your generator starts and then dies ? It can be due to a failed battery.

A faulty exhaust pipe of the generator can also be the cause of this issue. Sometimes, it’s defective. When it is so, the generator’s functioning is hindered. It cannot function in the way it is designed to. When the generator is made to run with a bad exhaust, its longevity decreases.

A few models of generators fail to run smoothly when there’s insufficient coolant. Water is usually used as a coolant in most generators.

It’s poured into the radiator of the machine. Now, if the amount of water present in the radiator is too low to cool down the machine, it automatically shuts down to prevent other parts from getting damaged.

Generators can detect a rise in temperature because the latest models come with a temperature gauge.  Whenever the machine detects a temperature rise, it shuts down automatically.

The various parts of the fuel tank are interconnected with one another by valves and narrow pipes. Over time, these pipes can get clogged or corroded, or damaged. When this happens, the functioning of all the parts is affected.

In case there’s no pressure equilibrium in the fuel system, the pipes can get air locked. Sometimes, they bend, cutting off the fuel supply to the various parts. Other times, there might be leakage.

No matter what happens, in each of these cases, the combustion chamber and the carburetor wouldn’t get enough fuel to run properly. This will undoubtedly hinder the proper functioning of the machine.

The latest models of generators usually do not suffer from this issue. Old generators tend to experience engine failure as they aren’t as strong as the latest ones.

Needless to say, when the engine fails and stops running, the generator automatically shuts down. This is a complex problem and only a professional can fix it.

Sometimes the spark plug accumulates dirt. When this happens, it fails to produce enough spark to ignite the fuel or air mixture. Consequently, the whole process of combustion fails. This ultimately affects the functioning of the engine and the generator tends to shut down when turned on.

How to fix a generator that won’t stay running 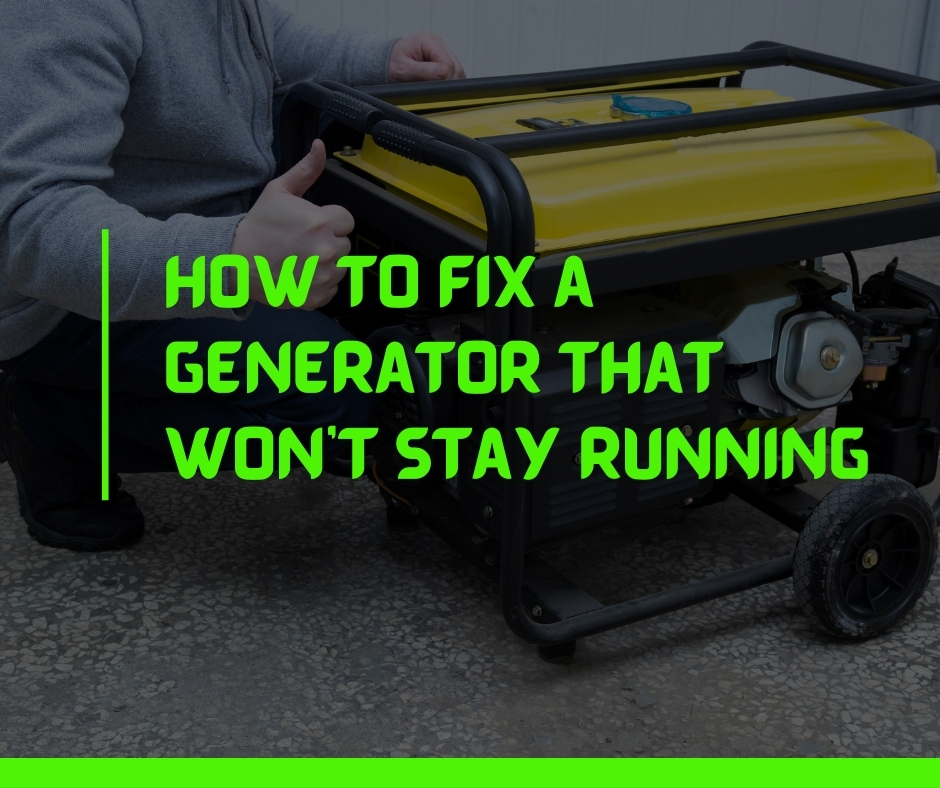 Now that we have examined the various causes that prevent generators from running continuously, we would go through the ways to fix the issue. The ways listed above can be done by homeowners, without requiring professional help. If you notice no difference even after following the methods listed below, you must call a professional then.

Let’s go through the ways to fix a generator that shuts down when turned on.

Check to See if Your Generator Is Getting Enough Fuel

If your generator starts and then stops, you must check its fuel tank first. Your generator might be running on low fuel, because of which it shut down midway. But, if you find out that the gas tank has sufficient fuel but the generator won’t stay running, you must inspect the fuel filter or the fuel pump in that case.

Despite having sufficient fuel, the generator might stop working because of a clogged or damaged fuel filter. In that case, changing the fuel filter is all you need to do. Follow the below-mentioned steps in that case:

Sometimes the fuel valve also gets clogged or jammed. If your generator runs then shuts off, it can be due to a jammed fuel valve. If the fuel valve is closed, the generator wouldn’t start at all. But, if it starts and then shuts down, it means a partially clogged valve is preventing enough fuel from reaching the engine.

We have already discussed how a clogged carburetor can be the cause of a malfunctioning generator. If your generator starts but won’t stay running, inspect the carburetor without fail.  It might get sticky or clogged or gummy. This hinders the proper functioning of the generator’s engine

If your generator starts then stops even after cleaning the carburetor, it’s time to replace it with a new one.

When your generator keeps shutting off, you mustn’t forget to check the air filter. To clean the air filter, follow the steps mentioned below:

Sometimes the fuel inside the engine gets overheated. It vaporizes as a result. In the process, it blocks the fuel delivery passage. This affects the functioning of the generator. It shuts down repeatedly after being started.

To solve this issue, you must put fresh oil into the fuel tank. Use a fuel stabilizer as much as you can. While doing so remember to put only fresh oil and pour the oil that’s recommended in the manual.

If you notice your generator starts but won’t stay running, check the exhaust system. Ensure it’s running properly. See the amount of smoke it’s producing. Is it normal or excessive?

Usually, a simple blockage in the exhaust system causes the generator to malfunction. If you notice that the smoke production is too much, call a professional without delay because generator smoke is extremely harmful to one’s health.

As we already mentioned,  sometimes a generator runs then shuts off due to insufficient engine oil.  Therefore you must check the engine and see if there’s enough oil inside.  The latest models of generators are designed to shut down automatically when there’s insufficient oil inside

Firstly, remove the spark plug from the generator. See if there’s any dirt or debris present inside. Use petrol and a knife to bring out the debris accumulated inside.  Before refitting it in position, make sure it’s dry.

If you notice a blue spark, it indicates that the spark plug is in proper condition. If there’s no spark produced or very little produced, it means the spark plug cannot ignite the fuel. If cleaning the coil didn’t work you must buy a new one and fit it properly. While buying a new one, remember to buy a plug of a similar type.

As you can see, a generator starts and then stops due to a variety of reasons. Mostly, this problem occurs due to the overloading of power. Unplug some of the appliances and see if the generator functions properly. If it does, it means overloading was the cause of the problem.

However, other reasons can also give rise to the issue. Therefore, try to find out the cause of the problem first and then proceed to fix it. For safety reasons, we would advise homeowners to call a professional and let him inspect the machine.