Some of us love to groove to loud music and playing it on our ear devices sometimes just doesn’t cut it. The experience of playing music loud and clear is very different from having to listen to it on your earbuds or earphones.

It is acceptable in most places to play loud music during the day but if you think about it, for most people daytime is for work and they hardly get time to play loud music let alone enjoy it. So it makes sense to want to relax to loud music after they get home in the evening or at night. But living in residential areas or an apartment, neighbors may complain about loud noise from your home.

But know this, as long as the music you play is abiding by the legal parameters, no one can have anything to say to you.

Is it Illegal to Play Loud Music after 11 pm? 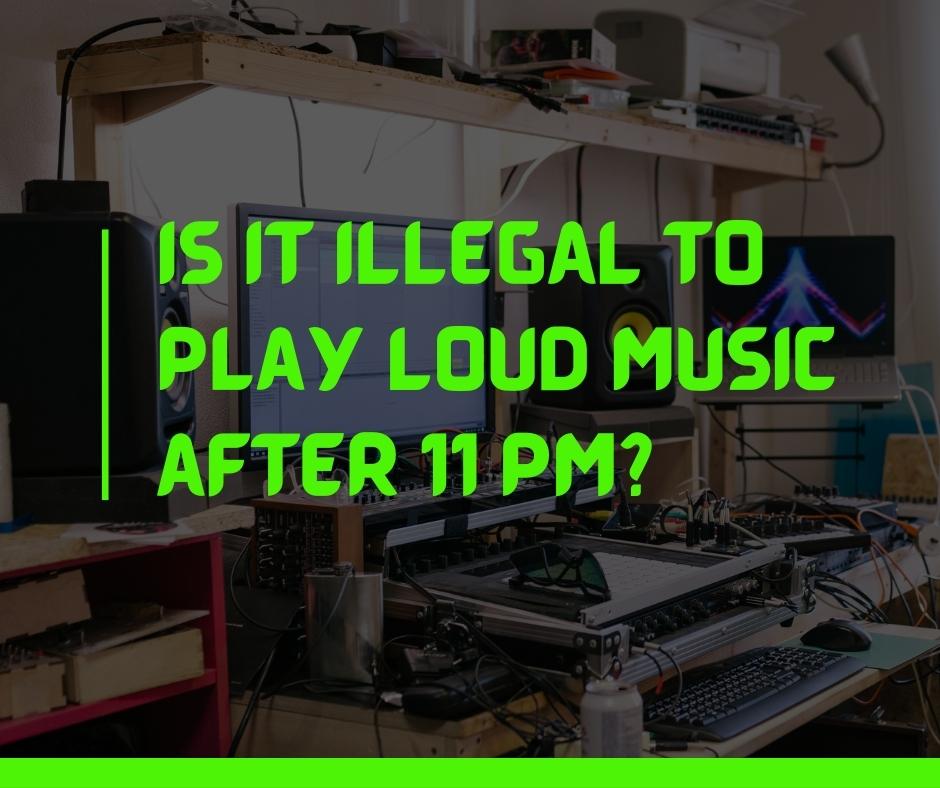 This is an often asked question. What should you do in case you have plans to throw a weekend party and the noise gets out of hand? It is not possible to suddenly halt a raging party before 11 pm or stop all the noise at once.

You are likely to get noise complaints from our neighbors if you create a racket between the hours of 11 pm and 7 am, so as long as the music you are playing is not accompanied by other loud noises such as screaming and yelling, you should be fine.

Playing loud music after 11 pm can be reported and often gets reported, especially during weekends. If at all possible, you should consider getting a soundproof room to play loud music in after 11 pm.

As long as the sound is within a permissible range of loudness and not distinctly audible from the exact location of the one reporting, it will not be an offense.

What time does Loud Music have to stop? 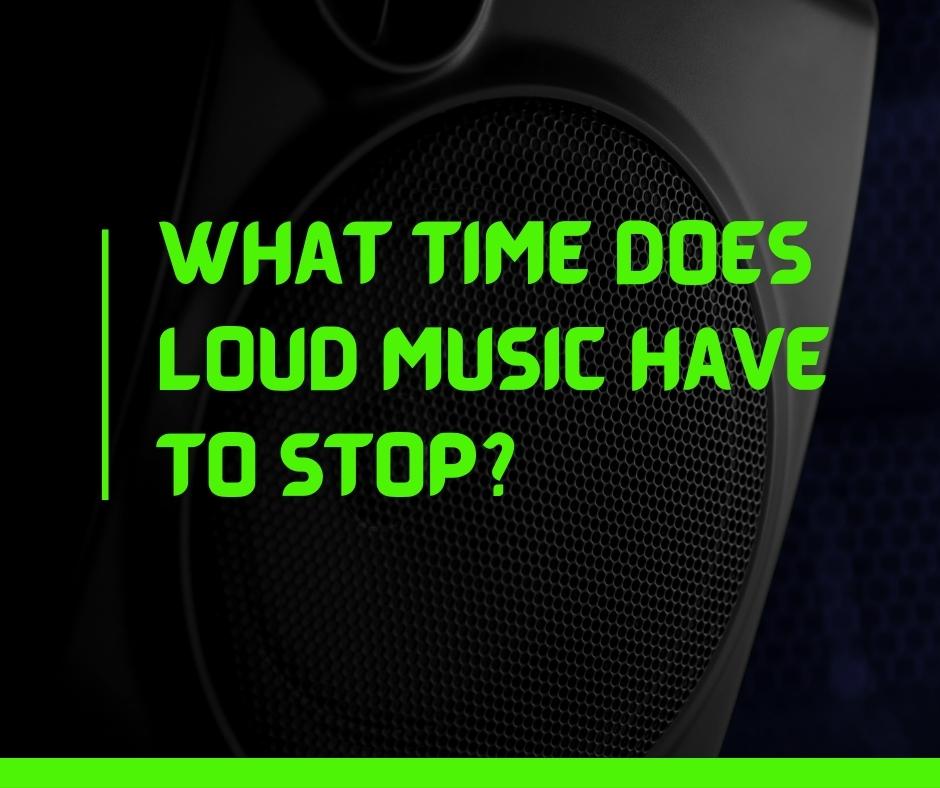 Before delving right into answering this question, let us first try and establish that the “loudness” of music is a subjective factor depending on what kind of area you live in.

If you live in a house located in a residential area and play loud music at night with your portable speaker, the sound range will be around 60-70 decibels and won’t be a bother to anyone if you keep your doors and windows closed. But if you do the same while residing in a flat, your next-door neighbor may be annoyed and register a noise complaint.

Any sound above 85 decibels is considered loud. For reference, the sound of a lawn mower is 90 dB, and if you are playing music as loud as that after 11 pm at night then it won’t matter where you live because you are most likely breaking a law.

Moreover, if your place of residence is around sensitive institutions such as trauma centers, old age homes, and pet clinics, then there are sometimes special provisions made about loud noise at night and the permissible time limit is preponed to protect the people and animals living in the said institutions.

Regulations and Laws in the US related To Noise at Night

In the US, the Environment Protection Agency has been catering to the country-wide noise pollution levels since before the Noise Control Act of 1972. In addition to this, The Office of Noise Abatement and Control is required to protect citizens from the ill effects of loud noises.

Usually, local governing bodies and authorities are responsible for implementing noise laws such as the ones mentioned and also ones such as the Quiet Communities Act of 1978.

The noise laws are relaxed or strictly enforced differently across the states such as in the city of Los Angeles, ideally, you should not be playing loud music between 11 pm and 7 am but it is often noticed that on weekends this regulation is thwarted by multiple places and the time limit is often stretched until midnight.

Industrial zones have more relaxed regulations on noise than residential zones, some of which do not allow any noise above 50 dB between 10 pm and 7 am.

Regulations and Laws in the UK related To Noise at Night

In Uk, the law gets involved when a loud noise is played between 11 pm and 7 am near residential zones or licensed properties. This is in accordance with the Noise Act of 1996 in England, Wales, and Northern Ireland.

In Scotland, if the local authorities think to implement Part 5 of the Antisocial Behaviour Act 2004, then they are supposed to look into any noise complaints from accommodations, shared private gardens, or shared property in a tenement or housing scheme. This does not apply to licensed properties. Some local councils in the UK have special patrols who investigate noise complaints in person.

In general, UK city councils are meant to properly investigate noise complaints that can be called a “statutory nuisance” according to the Environment Protection act of 1990. For noises to be classified as such, they must do one of the following:

After this, an abatement or warning notice is served to the owner of the premise from where loud noise at night is coming from and the notice contains specific levels of sound that one can play and between what hours.

The permissible level of sound that can be played at night can be no more than 34dBA ( decibels adjusted) if the underlying level of noise is no more than 24 dBA.

Statutory Noise cannot be applied to noise from house alarms or traffic noises but applies to loud music at night, sounds of talking and shouting from large gatherings at night, etc.

How Late Can You Play Music In a Residential Area? 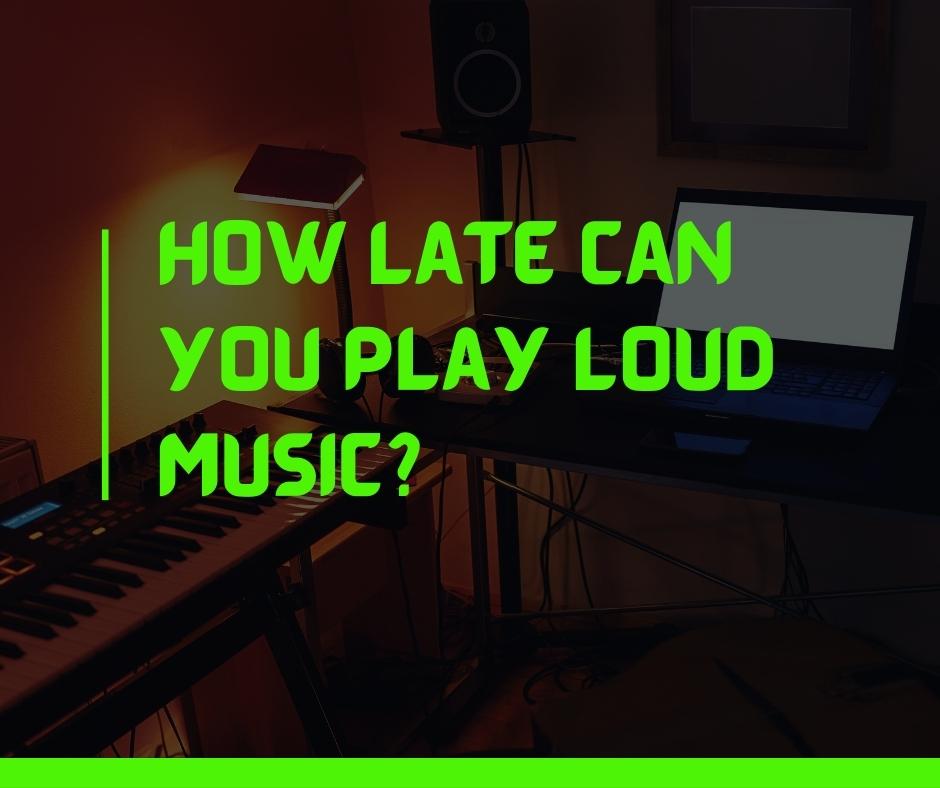 The thing is, if you are playing music at just the right level of loudness that won’t reach the ears of your neighbors then you can play it whenever you want. Better still if you get your rooms soundproofed and prevent the chances of a noise complaint altogether.

But you don’t necessarily have to stop playing music out loud, just make sure you stop it or reduce the volume before 11 pm and in some places, midnight. Therefore, the best thing to do right now would be to get familiar with the local noise laws as some places don’t allow loud music even beyond the hours of 11 pm to 7 am.

Someone causing a racket while you are trying to relax in your home can be annoying so by knowing the local noise laws, you will know exactly when you can call the authorities and get action taken against the offenders.

Noise laws vary from place to place as the locality houses different kinds of people. For example, if you are living near a trauma center, then it is very much possible that playing loud music at any hour of the day is completely illegal.

Being a responsible citizen works both ways and you cannot expect your neighbors to maintain silence late at night if you haven’t been doing so yourself. In any case, if your neighbor asks you to reduce the loudness of the music you have been playing at night, it is best if you do not ignore them.