Imagine shifting to a new place and sharing an apartment with a noisy, loud, uncooperative neighbor. Feels like a nightmare right? Well, people who have transferred jobs and rent apartments have been in such situations at least once in their lifetime.

There isn’t anything more annoying and irritating than having to put up with loud, ill behaved neighbors. On top of that, if your neighbor engages in illegal activities like dealing in drugs, etc. it makes your life even tougher.

In that case, your first instinct would be to get rid of the neighbor by using legal means. If you are currently in such a tough situation and desperate to protect your peace of mind, do not worry. You have come to the right place.

How would you guess your neighbor is an illegal drug dealer? Do you see a lot of people coming into the house late at night? Or does the apartment smell weird? If these are true, there’s probably enough reason to doubt and worry about your safety.

In this post, we have enlisted the ways in which your neighbor can be evicted from the apartment by legal means. Going through this guide would definitely give you some clarity and hope.

However, know that evicting a neighbor legally is a long, complicated process and you need to furnish abundant evidence to your landlord in support of your case.

How to get bad neighbors evicted? 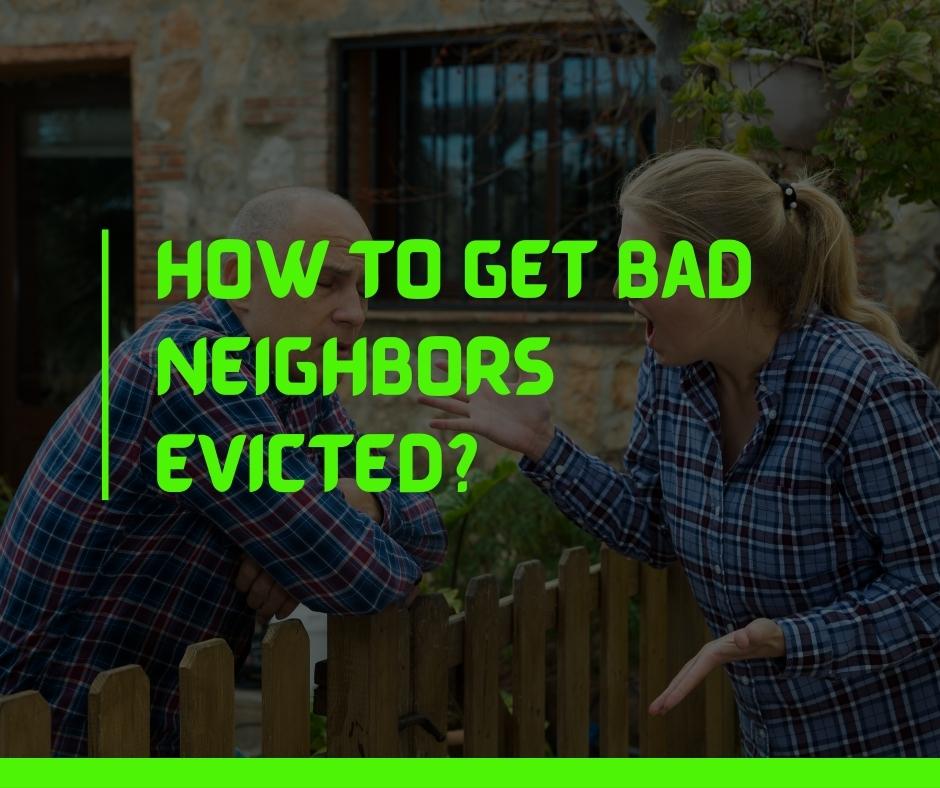 If a tenant’s right to quiet enjoyment is violated and compromised repeatedly, he/ she must bring it to the landlord’s attention. Besides lodging a complaint against the noisy tenant, enough evidence must also be submitted to the landlord supporting the complaint.

Upon receiving the complaint, it’s the landlord’s responsibility to inform the noisy neighbor about the problem he/ she is causing. Usually, neighbors comply with the request and mend their ways. If they refuse to do so, the landlord must opt for the eviction process.

Experts believe that evicting a neighbor based on his/ her behavior is really difficult because behavior is subjective. Only if you are able to back up your claim with sufficient evidence and recordings, will the law take steps against the concerned neighbor.

It would be even better if you can gather some other neighbors as witnesses to your claims. Without sufficient documentation, your eviction case against any neighbor is likely to fail.

Let’s go through the steps a landlord needs to follow to get a bad neighbor evicted:

Collect evidence against the noisy tenant 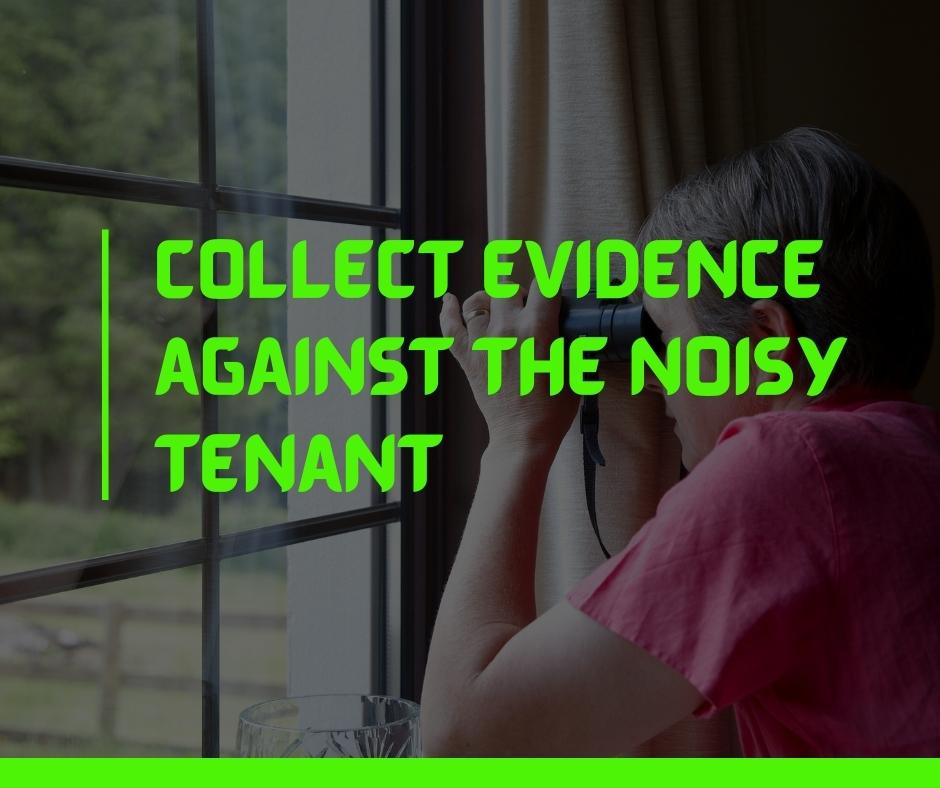 If a tenant has been facing issues while sharing an apartment with other tenants, he/ she must convey it to the concerned landlord. Upon hearing the problem, the landlord has every right to ask for appropriate evidence.

If the landlord receives enough evidence in support of the complaint, he can initiate the eviction process without delay. Unless the landlord sends an eviction notice, the process of eviction cannot be initiated.

Being a landlord, it is his responsibility to look into the needs and problems of his tenants. If he refuses to help the tenant in solving the problem, he violates the tenant’s right to quiet enjoyment.

In that case, the tenant has every right to sue him in court for not fulfilling his responsibilities as a landlord.

On the other hand, if the landlord comes to your rescue, the following steps are to be followed to proceed with the eviction process.

Send a notice to warn the noisy tenant 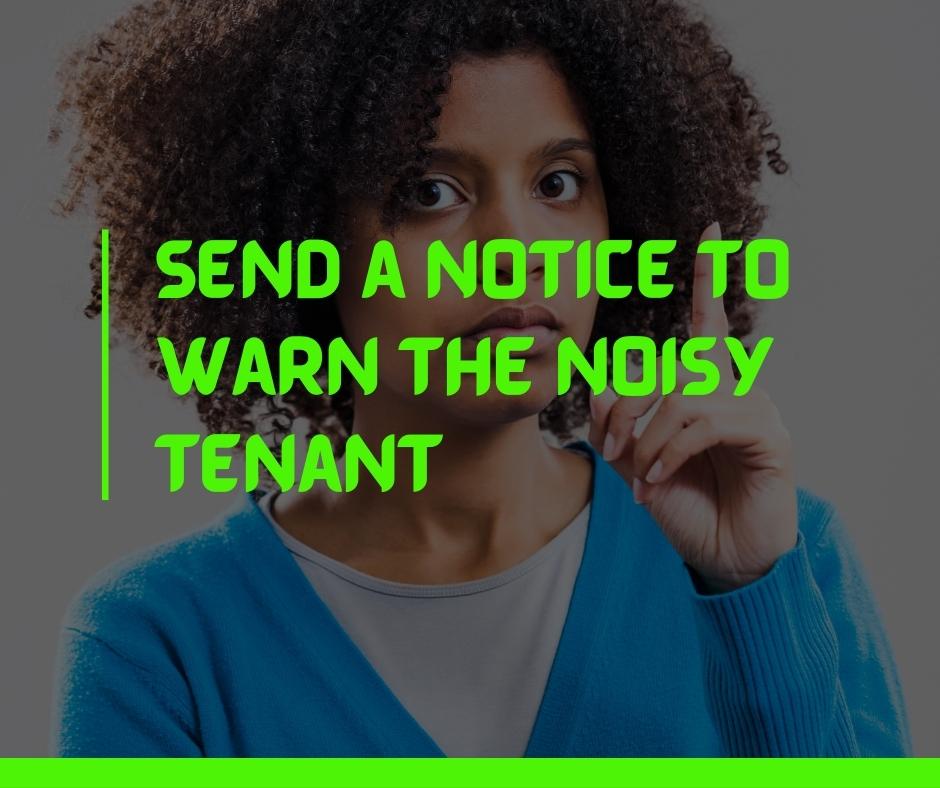 Soon after receiving a complaint and going through the evidence, the landlord would send a warning to the noisy tenant outlining the lease violations. In this case, the “notice of lease violation” would be about violating the right to quiet enjoyment.

These warnings or notices are called curable notices, meaning, they are sent to noisy tenants asking them to remedy their manners. They can mend their ways of living to avoid getting evicted later.

This is the first step to get rid of a bad neighbor. In the notice, the landlord includes a description of the problems you are facing and gives the noisy tenants five days to remedy their behavior. If your bad neighbor abides by the notice and stops being a nuisance, there’s no eviction and you continue to live peacefully. The matter settles there. However, if the neighbor refuses to comply, you proceed to the next step.

When the eviction letter is sent to the noisy tenant, he/ she is likely to evict the apartment without opposing the order. However, if the tenant refuses to move out of the apartment, the matter will be taken to the court by the landlord. In that case, the two parties need to contest and the process becomes costlier.

In case, the tenant doesn’t comply with the order of the landlord, the latter can file an eviction case in the court. When you file for eviction in the court, attach a copy of the eviction notice along with suitable evidence to support your case. This document would prove that your tenant was warned beforehand about the consequences of violating the lease agreement and yet refused to oblige.

The eviction has to be filed by your landlord in a small claims court. After successful filing of the case, the court sends the paperwork to the concerned tenant, asking him/ her to attend the court hearing. This date is usually given 2 to 3 weeks in the future from the day of filing the case. The eviction case would be discussed in the court on those particular dates.

After completing the formalities, you must wait to know the first hearing date of this eviction process.

The next step involves contesting for eviction, if the noisy tenant opposes. Once the court accepts your case and allotts the first hearing date, be present in court without delay. On this day, the renter would contest against you to prove his/ her innocence. The judge would hear both the parties and make a final decision.

If one hearing isn’t enough, both parties would be given the second hearing date. If you have gathered other neighbors as witnesses to your case, now is the time to present them in court.

The day of final judgment

After hearing from both the parties and weighing their evidence, the judge would either decide in favor of you or return you to square one. If your case was convincing enough and the eviction order was given by the court, the sheriff’s department would attach a writ of restitution in front of the neighbor’s door.

It’s true that the eviction process has been tediously slow in the past. In fact, there are instances when neighbors were actually involved in illegal activities yet they escaped eviction.

However the scenario is different now. New laws have been passed which allow neighbors to evict unsocial and bad neighbors, provided they can furnish sufficient evidence against them. People now have greater power when it comes to evicting bad neighbors.

Every year, approximately 3000 tenants across the globe are subjected to the eviction process, due to their unsocial behavior or indulgence in illegal activities. Though immediate actions are now taken by the courts against bad neighbors, the eviction process can continue upto seven months. Therefore, make sure to go by the law.

Only by sending an eviction notice, you will not get rid of a bad neighbor. Landlords are therefore advised to consult an attorney before proceeding with the eviction process legally. No doubt lawyers would be well aware of the eviction laws. They would guide you on how to move ahead and present your case to the court to make it look convincing.

While filing for eviction, the most important thing to remember is following the law. If you abide by the law, your task becomes easier. Every landlord has dealt with the hectic eviction process at least once in their lifetime. Therefore, it’s better to know about the process beforehand, to avoid losing time, unnecessary faults, and headaches.