Many of us have had the bad experience of our PS4 consoles making a strange noise. This can be endlessly annoying and distracting but more importantly, this can mean that your console may have some underlying issues that are causing the strange noise.

But one might say that some games are just loud, as in the sound design just makes it so but imagine trying to play such a loud game and if you couple that with the sound of the PS4 fan, you won’t be able to hear the sound of clickers. Some resource-heavy games do have a loud sound design, but your PS4 should not be adding to the problem. 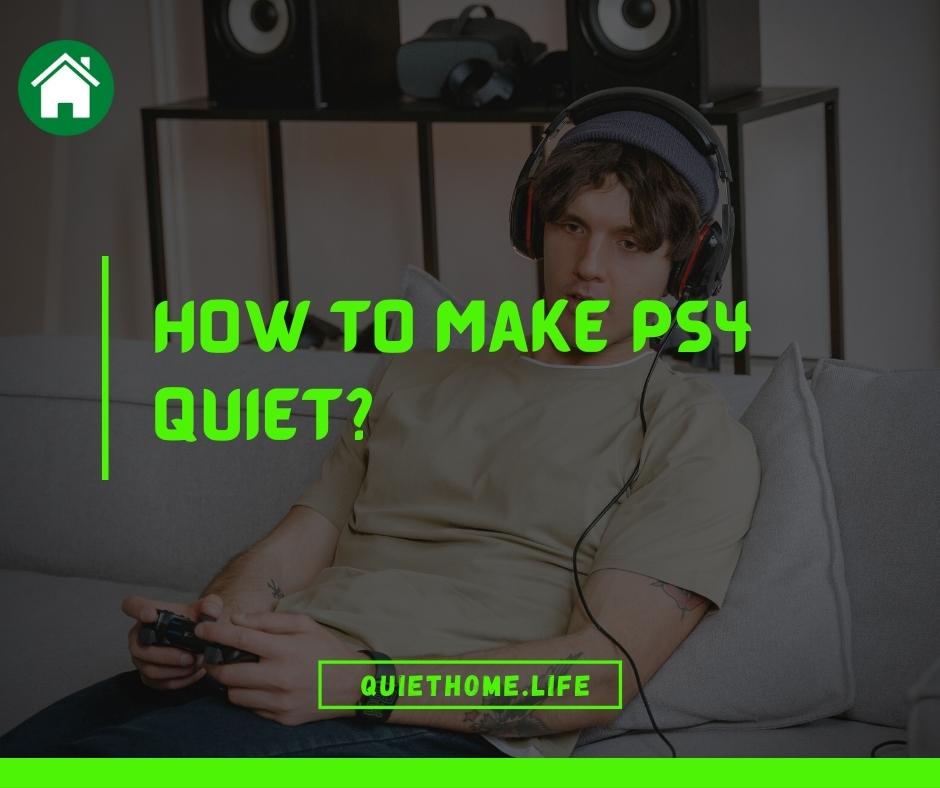 There are a number of ways in which you can make your PS4 gaming console significantly less loud. Some are basic up-keeping tips while some others involve taking apart the device and tweaking some inside parts.

Here’s what you can do to make your PS4 quiet.

Some of the games that can be played on a PS4 are quite heavily configured and push the device to its maximum functioning capacity. That is when the console goes into overdrive.

Therefore, there is a good chance that the sound you are hearing from the PS4 while you are gaming is actually the device vibrating. This happens because of all the inside parts that are whirring and causing the body of the PS4 to vibrate.

On top of this, the table or the counter you have placed the console on is also probably being pulled in by the vibrating device and the two in contact are creating an even more bizarre buzzing sound.

The only problem with rubber padding is that it might stick out like a sore thumb amidst the decked-up gaming set-up.

You can also get a wall mount to get rid of the problem totally. It might look a bit awkward in a vertical position but rest assured, it will work just fine. The only thing you have to keep in mind while investing in a wall mount is to make sure the stand does not block any ventilation exits of the console. Therefore, it is probably wise to get the stand customized or look for a wall mount built especially for PS4 consoles.

For whatever reason, if the air vents on the console are blocked, then the direct consequence of it will be a loud fan. The reason behind this is simple- overheating. Just like in any PC CPU, the fan in a PS4 is fitted to cool the internal parts and safely dissipate the hot air outside from the rear vents.

While the side vents draw in cool air, the rear ones guide hot air out. This is essential for the proper functioning of a gaming console because the games played on it generate large amounts of heat for the inner parts of the device and if the heat is not quickly dissipated then the parts will overheat and get damaged.

A common mistake that many make is that they place their PS4 inside a cabinet. They probably do that to save the device from being knocked down or to prevent something from falling on it but this just blocks the rear vents and the console fan has to work twice as hard to cool the interiors down. Now, what happens to a mechanical fan that is being pushed beyond its limit? It complains with a violent vibrating sound.

Therefore to make the PS4 fan quieter, place your PS4 in such a manner that does not block the vents.

Just like any other thing inside your home, PS4s get dirty. This dirt is both external and internal as dirt enters the console with the air that goes in from the vents and accumulates there. Now, dust gathering on the fan of the device is not cool because it restricts movement depending on the amount of dust.

This is why a dirty console fan will make a strange noise because it has to work twice as hard to perform its basic function of cooling the machine. Therefore an easy way to make a PS4 quiet and to keep it that way is to ensure that you dust off the dirt from the PS4 regularly no matter how tiring a chore it might seem to be.

The other thing that you can do is to get a dust cover for the device but you have to be very careful and remember to take it off every time you power up the device for gaming. Keeping the extra cover in will surely cause the parts to overheat and will also probably generate some other concerning sound that’s not supposed to be there.

For a full internal cleaning of all the parts in a safe manner, follow these steps:

The thermal paste is, well, a white paste that keeps the system cool and transfers heat to reduce the load on the other cooling mechanism inside a PS4. By now we know how corrosive and damaging heating or rather overheating can prove to be for a PS4.

After years of usage, this thermal paste dries off and does not work anymore and that is when one has to replace it. The process to remove and reapplying it is kind of complicated but in short, you will need a T8 or T9 screwdriver to do some unassembling of the console. If you are not confident about it then you can just take it to a service center, but the truth is that will be a waste of money.

Have any tech-savvy friends? Call them up and ask them to instruct you on how to do it in detail.

Use your console in a cool surrounding

A PS4 generates enough heat on its own and definitely does not need any input from its surroundings. This is why it is always recommended to place a gaming console somewhere where it does not receive external heat either from the weather or from other sources.

For example, if the kitchen is adjacent to the living room then the gaming console is best not placed there as the air around the kitchen is always a bit warmer than in the rest of the house for obvious reasons.

But then not everyone lives in a huge villa that can have a cooling room so if placing your PS4 in a cool place is not possible then consider investing in a cooling stand. Some cooling stands are multifunctional such as it charges the controllers as well as cool the PS4 down.

The surest way to make a PS4 quieter is to remove the source of the noise, that is the cooling fan. However, before doing that you should remember that if you take apart the device within the warranty period, it will void the warranty.

If your warranty period is over then you have nothing to lose and give disassembling the console a try, but only if you are confident about not breaking it. Otherwise, you will just end up damaging it more. There are a multitude of videos on the web that you can follow to replace the fan.

Use an HDMI Cable

This is not technically a method or trick to make your PS4 any quieter but rather to avoid the issue temporarily by putting the noisy machine at a distance away. Use a long HDMI cable to connect the TV and the console and place your console somewhere where you cannot hear it.

This way, you will be able to game in peace and not have to hear the distracting buzzing of the PS4.

After trying these DIY hacks, if the noise persists then the problem is something more technical and you should call the concerned authority on the matter to solve the issue for you.

If, however, these have worked out for you and the noise from the device is significantly lesser, do not take it as a signal to neglect the upkeep of the PS4. Cleaning and cooling a gaming console should be a regular habit and not a last resort.