Did you know that the sound caused by a door getting slammed against the frame is as high as 80 decibels? And no matter how many times a door makes that sound, one can never get used to it. A door slamming constantly throughout the day is not only annoying but can also break your concentration or worse still, wake up the baby that was finally put to sleep after a long while.

The reason behind the slamming of doors can be a sudden fit of anger taken out on the door or just a strong gust of wind from mother nature. It can also be a mechanical error with the door’s fitting that keeps making it slam against the frame. The sudden noise caused by a slammed door is bad for the ears for sure but is probably worse for the door itself, the frame of which will get damaged if some preventive measure is not taken.

There are many ways to keep doors from slamming. And once you have identified the reason behind this nuisance, you can start working on them.

10 Ways to Stop Doors from Slamming 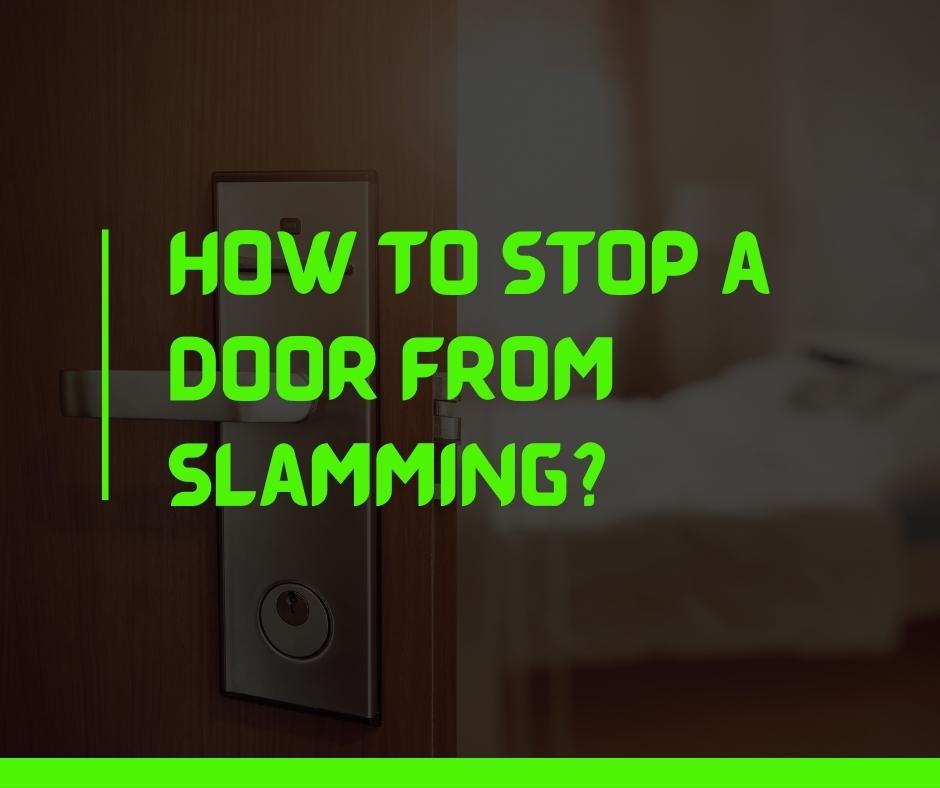 Below discussed are some methods that you can try to prevent the door from slamming.

If your solution to this problem is solely to try to stop someone from slamming a door politely, then it may not always work. Instead, you can make some changes to the door itself to keep it from a loud noise.

Hinges are the pivotal part of a door on which it swings. If a door keeps getting slammed with force, then the hinge will start coming off causing an error in the vertical alignment of the door. Installing anti-slam-door hinges addresses this problem by slowing the motion of the door when it reaches closer to the frame. So no matter how forcefully, it is shut, the door will not slam.

These hinges, also called a door slam stopper hinge, come in two types, hydraulic and mechanic. Hydraulic hinges use a fluid pressure device to control the full weight of the door from being slammed against the frame.

Mechanic Hinges also serve the same function and are used for lighter doors such as those of a cabinet for a noiseless and smooth door opening and closing.

The two share a similar purpose to prevent door slamming by restricting the speed of the swinging door. The main difference is that while the hydraulic mechanism uses fluid for its functioning, the pneumatic door closers employ the usage of compressed gas.

Installing door closers are a sure way to stop heavy doors from slamming against walls or the door frame. This is done by controlling the swing speed adjustment. The latching speed adjustment takes care of the last few inches before the door closes shut and the backcheck adjustment controls the resistance offered when opening a door past a certain point.

Some models of door closers also come equipped with a valve for delaying the speed at which the door closes. These valves keep the door open for longer times and let old people who move slowly and persons with disabilities pass safely between the doors. 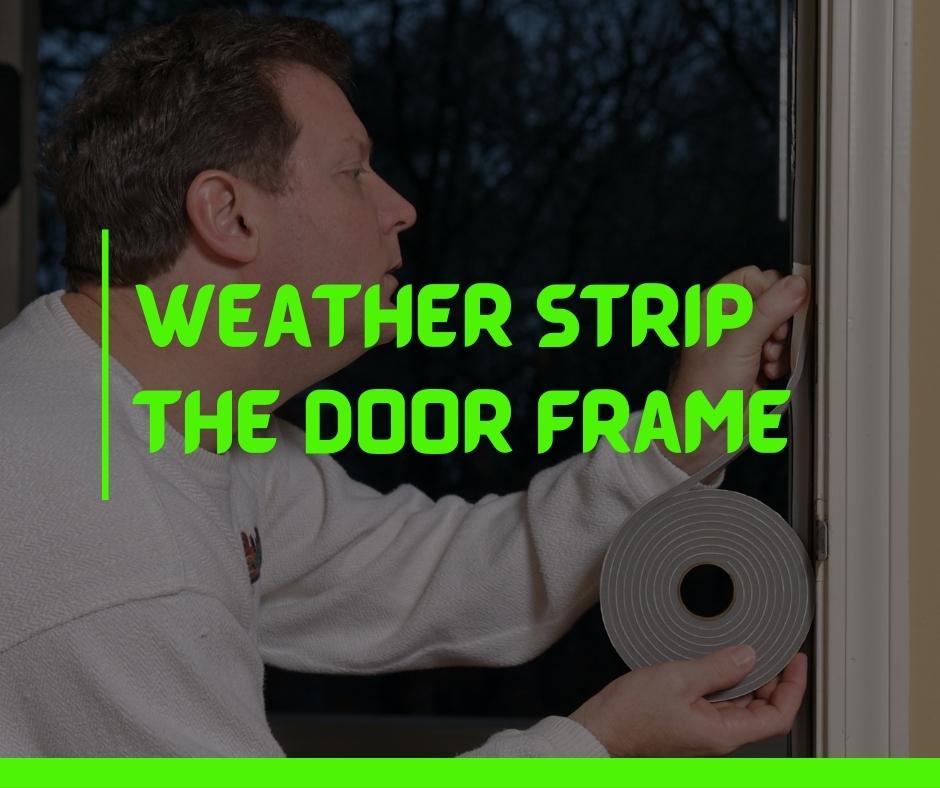 For a cheaper way to stop a door from slamming, you can use weather strips to dampen the noise made when a door is slammed. The process to install it is simple and can be done without any pre-required skill or experience. All you have to do is measure the length of the door frame and cut a very thin strip of that length.

If the strip itself is equipped with a sticky side, then you have to peel the paper as you slowly apply it top-down on the frame. Peeling the entire strip before you attach it with the frame isn’t recommended because then it will keep getting stuck in different places and repeatedly taking it off will ruin the adhesive.

Or you can use external glue for attaching it, the result will be the same. Lining the door frame with foam will make sure to reduce the impact of the slamming door and will not only reduce the noise but also reduce the damage to the frame.

Although the primary function of weatherstripping is to close the gaps between a door and the frame to prevent any rainwater or sunlight from entering the room, it is also used for soundproofing purposes. It can also act as an excellent anti-door slammer as well.

Materials such as foam and felt are often used for weather-stripping.

Use a Pinch Guard

Pinch Guards are small U-shaped installations made between a door and the frame to stop the door from closing on hands and fingers. But it can also be a good way to prevent slamming doors. It is essentially a barrier between the door and the door frame and can be placed in the middle of a door using the two handles on either side as a harness.

Pinch Guards are easily removable so if the door in question needs to be shut from time to time, such as during the night, the guard just has to be taken off for the door to shut completely again. 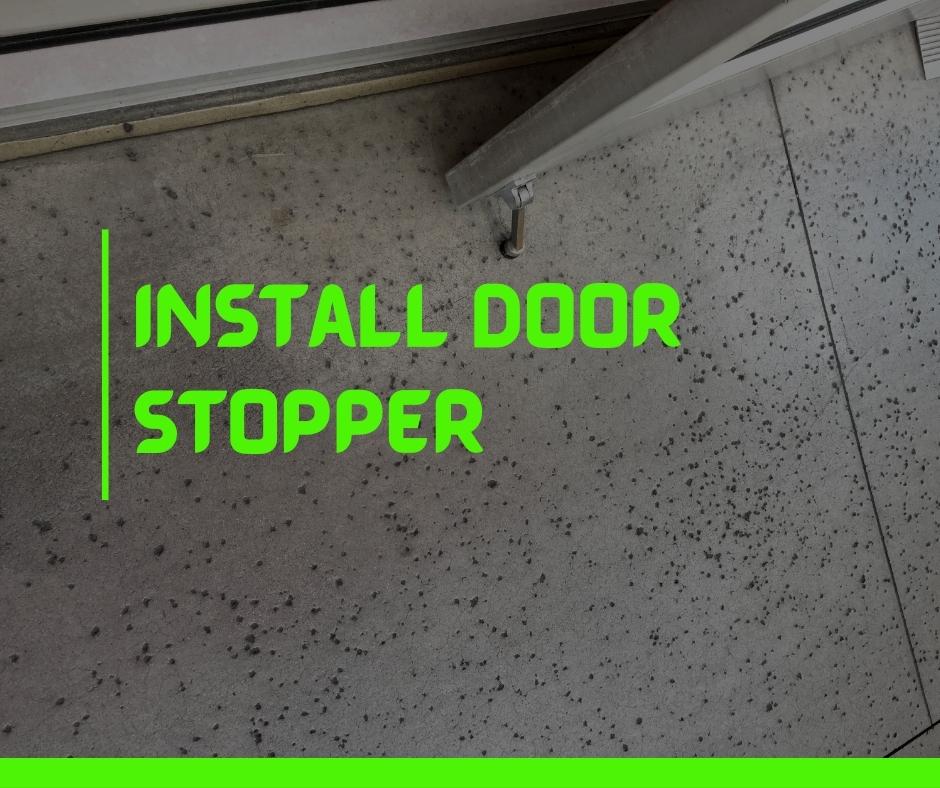 A Door Stopper is probably the most common way to keep a door from slamming shut all the time. Some doors need to be kept open all the time, such as in a school where people pass between rooms a lot. So if a door keeps slamming, someone can get hurt. Door stoppers hold the door in one position by attaching themselves to the ground with friction, that is, the friction between the door stopper and the ground keeps the door static.

Door stoppers are installed at the very bottom of a door and have a retractable arm that can be adjusted to keep its other end on or off the ground. The free end of a door stopper usually has rubber attached to it to generate a non-abrasive friction that will not damage the floor.

Use Felt Pads to Cushion the Door

In functionality, they are similar to sticking foam strips or weather strips along the edge of the door frame except that they are much easier to install. The pads are circular in shape and come with a sticky side which can be used after peeling off the layer of paper covering it.

You can either cover the entire length of the door frame with felt padding or just use three to five pads on each end. This way, when the door is slammed shut, the full impact of it isn’t felt by the door frame and as a result, there is no sudden noise.

Check if the Doorknob is Working Fine

Sometimes, even when you close the door, it keeps opening halfway and slams against the frame from time to time. Maybe the doorknob isn’t locking the door properly which is why it won’t stay shut and latch itself to the frame.

Door Knobs are made of many tiny parts and if even one part falls out of place, the entire assembly falls apart. Sometimes, this is caused by a massive door slam done previously. Rust of the metal parts can also be a reason why the doorknob won’t turn smoothly and latch the door.

In most cases, it cannot be fixed, but if you are lucky you will be able to get the defective part replaced and get the doorknob up and running again. If not, then you will have to replace the entire mechanism. It is not very pricey and often is an effective way to keep door from slamming.

Place a Cloth Under the Door

If your doorknob is broken, then you need to find a solution to stop slamming doors until you get it looked at or replaced. In the meanwhile, you can keep the door static by placing a cloth between it and the ground. Closing the gap with a cloth will remove the chances of the door freely moving and slamming. It is most definitely not a permanent solution but is a good temporary one.

You may have noticed these in schools or hospitals where silence is much valued. It is a very efficient anti-door slammer product that is also quite cheap and easily available. It is made out of heavy-duty rubber and its two sides look like a cone and a flat circle respectively.

These were brought into the market as a solution for quieter doors and can be attached to the door frames by drilling a hole into the stop strip. The elongated cone face of the product is slipped inside the hole while flat circular face act as a cushion against slamming doors. These work on both metal and wood.

The difference between this and a regular door stopper is that this uses the principle of magnetism to keep doors from slamming against the door frame. Magnetic door stops are usually installed in two parts at the back of the door and on a parallel portion of the wall it closes on.

The magnet is attached to the wall installation while the door installation is equipped with a magnetic metal. When the door is opened, the two parts of the doorstop are stuck to each other and hold the door in place. This prevents the door from moving freely and prevents it from slamming against the door frame when a strong gust of wind blows.

Many know how painful it can be when a door unexpectedly shuts on your finger before you could remove it.

Slamming doors can be extremely distracting and annoying and so you should try these hacks as soon as possible to stop that awful sound. The process for each of these ten methods is not very complicated and mostly can be done on your own.