Gaming is one of those intense activities that puts a lot of strain on your PC’s parts, especially the CPU and the GPU. Often the problem that occurs in a PC which is used for gaming is that the CPU starts to overheat.

But the thing is that, it is normal for a CPU to get heated while the PC is being used, what the user needs to be cautious about is the optimal CPU temperature and whether or not the device is overheating.

The simple reason behind this is the fact that gaming uses many components of the computer and makes the hardware perform intense actions and at a higher speed.

While a heated CPU is normal, a consistently overheating CPU is bound to have a breakdown sooner or later. This is why you need to make sure that safe CPU temps while gaming is maintained. 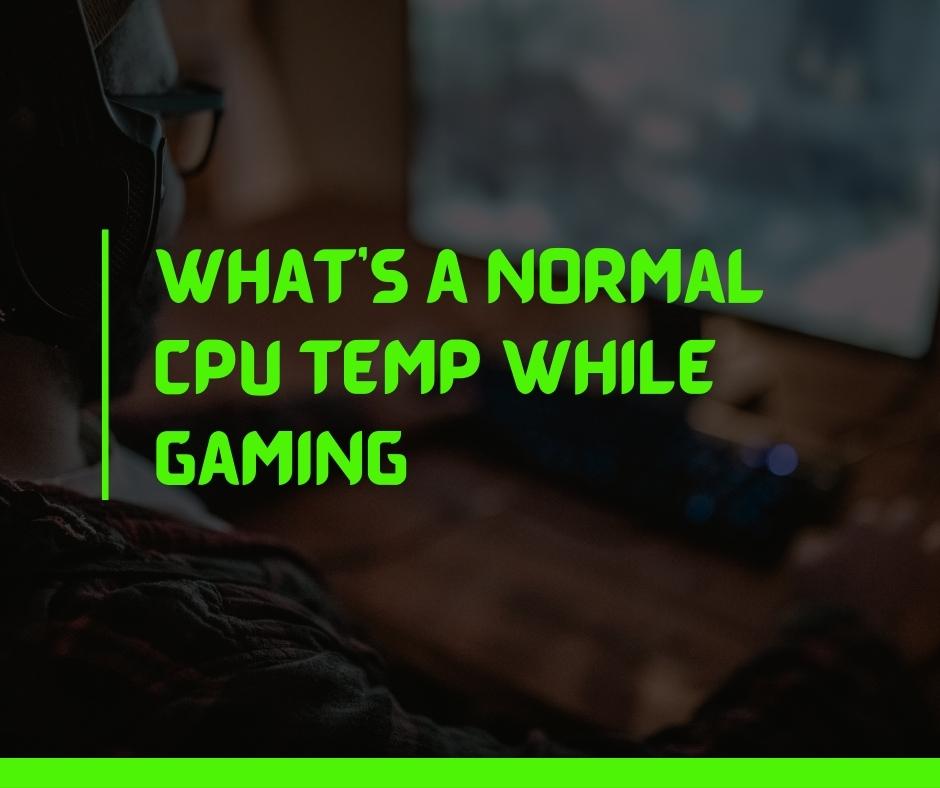 Older computer models tend to get heated up fast while newer models have a better resistivity to overheating.

This is why it is difficult to specifically have any one normal temperature that is applicable for all the computers out there.

The exact configuration of your PC will determine what will be its normal CPU temp while gaming or how much heating is alright with the CPU.

However this can vary depending on what type of processor you have. Some processors are made solely for gaming purposes and thus can withstand higher ranges of heat.

Here is a list of some most commonly used processors and their optimal heat withstanding ranges:

Many people who play games on a daily basis do not even realize that their CPU is overheating but there are plenty of tell-tale signs to identify a faulty CPU.

Excessive lagging, the PC randomly shutting down or making strange scraping noises, the fan making a loud noise and a slowdown of the functioning speed are all signs that the CPU is overheating and needs to be looked at before it breaks down.

Why is My CPU Temp So High When Gaming? 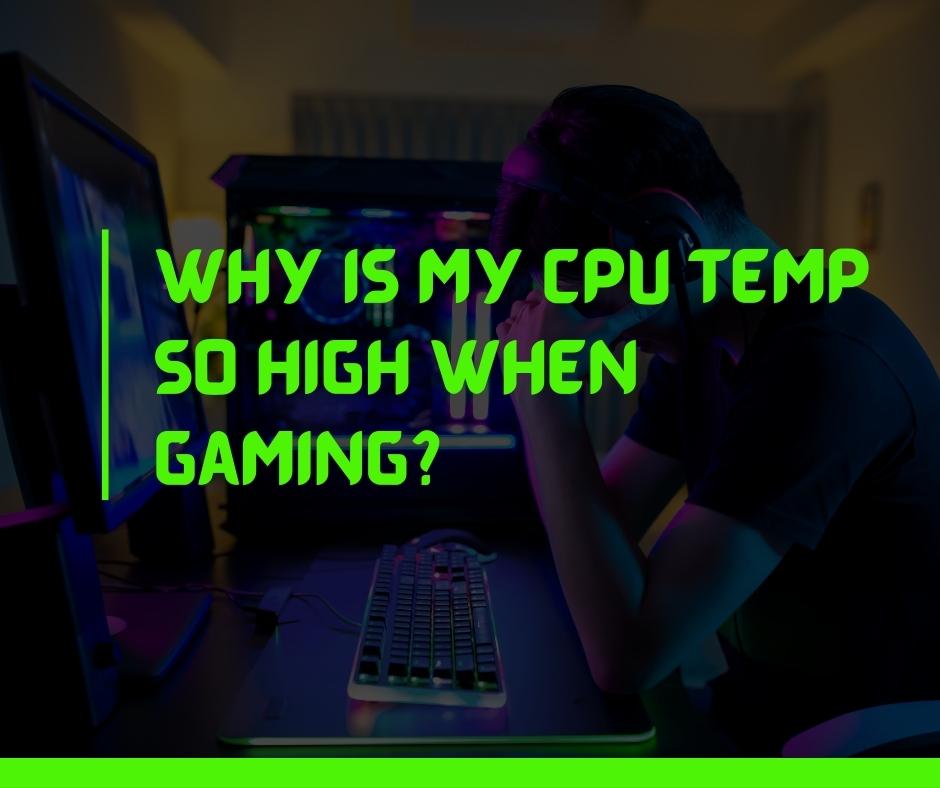 To maintain a normal CPU temperature while gaming, it is important to know what exactly is causing the overheating. Many believe that it is caused by overworking the PC but that is not entirely true.

Your computer is meant to be used for longer durations and that is why sturdier processors are being introduced every few years. But then what is causing the overheat in the CPU?

When you connect your PC to the electric source, it also generates heat energy and the more you use the device, the more heat is generated. By now we all know that excessive heat is detrimental to the performance of a computer and thus the heat energy needs to be dissipated outside the device.

You will notice that there are vents/ holes on the surface of the computer case. These vents guide the hot air outside with the aid of the CPU fan which also works to keep the CPU at an optimal temperature.

But this hot air needs a place to go, right? If you have placed your computer case in the corner of a room with no windows nearby then you need to change the placement as soon as possible.

Keeping the computer in a cool room with adequate ventilation is very important for its proper functioning. Also, to maintain a normal CPU temperature while gaming, the room can be fitted with an Air Conditioner to bring down the overall temperature.

Dust accumulation is one of the most common reasons behind the overheating of the CPU.

Often when the computer is placed in rooms with open windows and doors, too much dust gets inside and makes its way through the vents of the computer case. The computer case houses the fan, whose primary function is to cool the device down by dissipating the heated air from the inside of the CPU to the outside.

Since the fan is located just behind the vents, it suffers from dust accumulation the most and eventually slows down because the blades can’t function properly. If you are gaming with a device that has a malfunctioning fan then the CPU is bound to undergo overheating.

An average PC has quite a large number of wires and cables connecting its various parts. The reason why your CPU is overheating is probably because of the tangled cables that have been placed together in a bunch somewhere near the CPU. These wires or cables support the functioning of the heavy-weight computer and thus generate a lot of heat individually and when bundled together, their heat multiplies to cause overheating.

Moreover, placing the bundled cable near the vents could block the airflow and disrupt proper ventilation.

This is why it is very important to manage the placement of the cabled properly and to make sure that not more than two wires are placed together at any place.

This is a common practice among gamers who play games that require very fast reactions from the players. To continue being in the game, gamers often push their computer to the limits by operating the functions as fast as possible.

If the configuration of the PC does not support this, then it will overwork the PC and cause it to overheat.

Some processors support overclocking and thus come with a profile suitable for it. And unless your PC is built for it, it is recommended you do not do it.

The Thermal paste is a silver substance that is applied to the processor and facilitates the transfer of heat from the IHS of the processor to the water block of the CPU cooler, whose primary function is to guide the heated air outside the CPU.

Over time with use, this paste dries out and stops being efficient and this can be one of the reasons why your CPU is overheating.

One of the basic tenets of devices like computers, laptops, and mobile phones is that the more programs or software you have running, the more strain will be applied to the processor.

And while playing games, a significant number of programs are used by a PC and sometimes those programs keep running even after you are done playing the game.

Therefore a simple way to maintain a good CPU temp while gaming would be to make sure that you close down all background programs from the task manager.

How Do I Lower My CPU Temperature While Gaming? 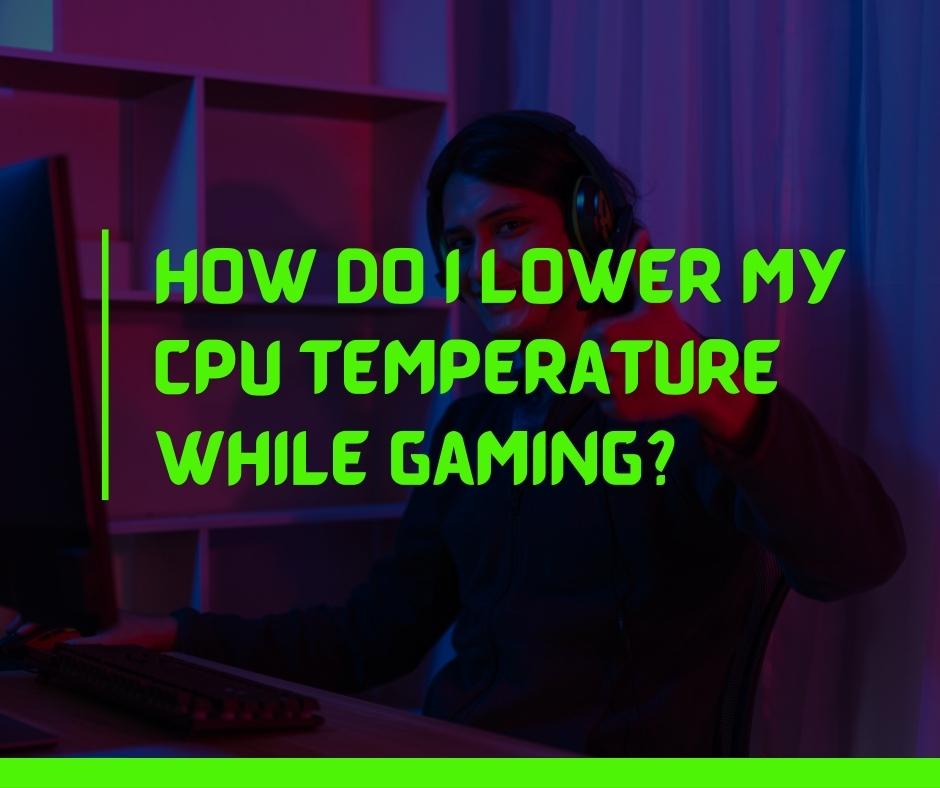 These are a few methods you can follow to maintain an average CPU temperature while gaming:

The waste heat that is generated when a computer is operated needs to be kept away from the hardware. That is what CPU coolers do. They dissipate the heat outside the CPU to keep its components in a permissible range of heating.

Computers that are used for gaming need better and superior quality CPU coolers so look into that. It might cost you a high amount but this will be better than having to replace any other hardware parts or the entire CPU for that matter.

We have already discussed that a lack of proper ventilation can heat a CPU unnecessarily. Thus placing the computer case in a location that won’t block the airflow from the CPU is very important. In most homes, the usual practice is to place the PC set-up in the corner of a room or against the wall.

That is not good. Not only does all the dust from the room accumulate in the corner, but the wall blocks the airflow.

Therefore the way out of this situation will be to place the computer case where it can breathe, as in where there is no immediate barrier near the vents. If you have a lack of space and have no choice but to place the PC set-up near a wall, then at least make sure to keep the computer case on an elevated place such as a table.

Also, placing the PC near a window for good ventilation will only invite more dust and dirt so that is not recommended.

The processor of a computer generates a significant amount of heat and that is why the thermal paste is applied to it to facilitate the easy transfer of heat from off its surface.

This thermal paste can get dried up over time and can even fall off. One sign of a dried-off thermal paste will be an overheating CPU even without the PC being overclocked or used intensively.

Reapplying the thermal paste will solve this problem. All you have to do is to unscrew the side panel of the CPU and remove the cooler. Then you have to gently scrape off the existing thermal paste and apply a fresh batch again.

After waiting for 5 minutes, you have to re-attach the cooler and the side panel again. A processor with normal cooling will help maintain a safe CPU temperature while gaming.

A computer case keeps the most important parts of a computer enclosed in a compact space. It is like a shell that protects the vital organs of the computer and thus this shell needs to be of superior quality so that external and foreign elements like dust, liquids and small objects do not harm the important components.

A computer case also helps to keep the computer cool. It has vents in optimal places to ensure proper airflow as well as a mechanism to cool the computer down.

If your existing computer case is not doing its duty well, then it is time to replace it.

Close Background Programs Before and After You Start Gaming

Unused programs that keep running in the background lead to unnecessary heating up of the computer as more parts of the hardware are used.

Thus before and after your game, run the task manager to see if all unnecessary applications or programs have been closed down.

You should check this before you start the game because gaming itself utilizes much hardware and on top of that if the PC has to support background programs from previous processes then the overheating will be detrimental to the CPU.

Clean Your Computer From Time to Time

Viruses are parasite programs that utilize and deteriorate your computer’s hardware without you realizing it.

The surest way to avoid this is to run frequent scans and keep your computer clean from unwanted junk files.

The cleaning should also extend to the physical parts of the computer as you shouldn’t allow dust to accumulate anywhere.

Therefore every once in a while, make sure to unscrew the side panel of the CPU case and gently clean the dust from the insides with a brush or a blow dryer.

While the ideal CPU temperature while gaming depends on the exact model you are using, it should still not cross a certain range.

Always make sure to check the maximum range for the processor you are using. Also, if gaming is your purpose then you should always go for processors that come with a suitable profile for overclocking.