Have you ever tried to enjoy a gameplay with insanely good graphics and sound and discovered that there was an unwelcome sound coming from the PlayStation like it’s haunted or something? It’s not a very savory experience, is it? More often than not it’s the ps4 fan that is the culprit, making the PlayStation so loud in general.

But it will be wrong to assume that it is only the cooling fan that is making your PS4 so loud as there can be some other internal issue too.

To learn about why your ps4 may be making strange and concerning noises, read on! 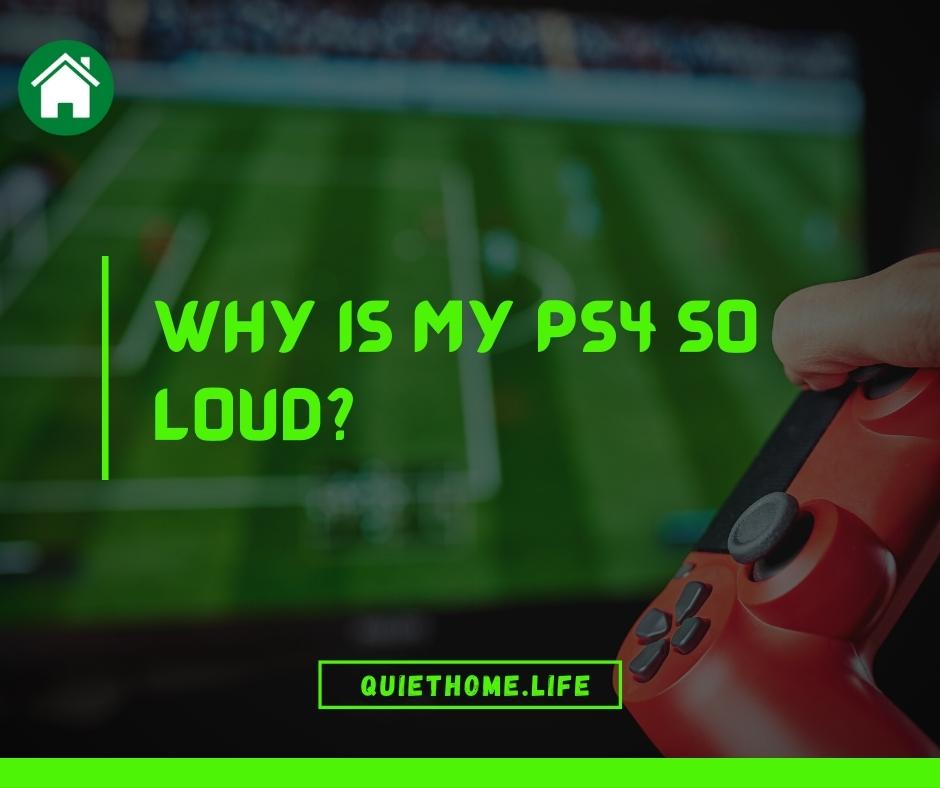 As already mentioned, the problem of ps4 making a loud noise can be due to several reasons. And this is quite a common problem. So the most common reasons have been listed here. Some of these can be solved by yourself by exerting a little effort while some other issues are very technical and will need the parts to be disassembled.

Believe it or not, something as simple as dust can literally wreck electronic devices to the point of damage. With the pollution levels today it is practically impossible to keep dust outside of living spaces unless you are living in a special facility that filters outside air- in other words, unrealistic and impossible.

That is why your ps4 is also falling prey to dust accumulation without you realizing it. Have you ever noticed tiny vents on the side and the rear of your gaming console? These are vents for air to be guided in and out respectively. Now you may be wondering that if the air has so much dust then why would the product design allow for air to be brought inside the device?

That is because a gaming console generates large amounts of heat when being used and if this heat is not arranged to be cooled. It will overheat the inside parts and damage them. That is cooling mechanisms are in place that bring in cold air from the outside and cools the interiors and then guide this air outside.

The only problem with this is that dust also comes in with and settles on the inside parts, especially the cooling fan. So if you find your ps4 making loud fan noise, it is probably because the fan is burdened with a heap of accumulated dust and is being pushed to its limit. The only way out of this is to dust the console frequently and also clean it occasionally by taking the side cover off.

You can also invest in a dust cover but remember to keep it off when gaming.

As a gamer, you probably already know that some video games go heavier on graphics than others ones. And the more intensive the graphics for a game, the more pressure exerted on the gaming console.

The internal parts work harder to support the graphical configuration which leads to more than usual heating of the console and that automatically means the cooling fan has to work twice as hard to cool the parts down.

The best way to check if this is indeed the case is to use the ps4 for a less graphics-intensive game and see if the problem persists. If the cooling fan is making a loud buzzing noise only when playing heavily configured games, then there is nothing you can do except let the machine cool down.

One mistake that many ps4 owners make is that they store the device inside a cabinet or someplace covered. They do this to avoid the device from getting knocked over or hit with something damaging. While this is a justifiably valid reason, it is not good news for the longevity of the PlayStation.

This is because as already explained above, the device draws in cold air from outside to cool its heated parts down. If you are stashing your ps4 inside a cabinet which itself is a cramped place with a minimal supply of air, then the device cannot cool itself down which leads to overheating of the parts and overworking the fan. And we all know what is the tell-tale sign of an overworked fan- a terrible buzzing noise!

There are quite a few possibilities as to why the hard disk is making a noise. The most common is damage to the body. If you have dropped the external hard drive or spilled water on it then there’s a good chance the drive is damaged and has started failing. This may also happen due to the fact that the ps4 in question is very old and has been used for a long time which is why it is giving out.

Another plausible reason behind the disk drive making noises is a faulty electrical supply. The noise will occur when the hard drive does not get a steady flow of electricity and there is no backup electric supply.

If you hear clicking sounds from the hard disk drive then the cause may be two- a misaligned read/write head due to dropping the device or not handling it with caution. The other reason may be a broken disc platter. In this case, the actuator arm will not work properly and swing back and forth in search of the disc platter, making a clicking sound.

What is making your PS4 fan loud could be the fact that it is broken or just has come loose after prolonged usage. This is quite a common problem and a loose cooling fan will make horrible rattling noises unless it is put back in place.

This sound will be distinctly different from a buzzing sound that an overworked cooling fan makes and is also easily recognizable.

Horizontally Positioning Of The PS4

The positioning of a gaming console has much to do with how it functions. You would not think of placing a CPU upside-down beside a computer, will you? Similarly, when placed horizontally, the gaming console starts to overheat.

This is because the vents through which air goes inside for cooling purposes are located on the bottom of the device and when you place it horizontally, they get blocked. This also disrupts the airflow and causes the inside parts to overheat. This automatically makes the fan work harder to cool them down thus causing the buzzing noise.

After prolonged usage and after being exposed to lots of heat, this paste can dry off and the dried-up paste does not transfer heat as well as the wet paste. The direct consequence of this is the temperature of the gaming console rising by significant amounts resulting in the PS4 making a loud noise, especially the cooling fan.

If none of the above reasons are why the PlayStation unit is making that noise, then chances are it’s beyond your field of expertise unless you are a pro at handling and repairing technical devices such as these.

This is because the problem might lie with internal parts being defective and in need of replacement. The fan might be making the noise but the cause may be different in each case. Whenever a console part does not work as well as it is supposed to, the device starts overheating and the fan starts getting loud. The only way out of this is to change or repair the faulty part and not the fan.

Also, a gaming console is made by connecting a many small parts. Some of them are quite tiny and may get loose. Now loose parts tend to end up hitting the rotating fan and if that is the case then the sound will be far more intense than the simple buzzing of a loud cooling fan.

Some of these problems can be solved at home without taking the ps4 apart. Such as you can easily dust the unit on your own without needing professional assistance. Cleaning the vents and insides of the machine requires a simple removal of the side cover, after which you can use your vacuum cleaner at the lowest pressure to suck out the dust.

But if we are talking about hard disk errors or defective parts then it is always advised that you take the device to a professional. Taking it apart on your own before the warranty period is over will nullify the warranty.

The type of sounds that the device is making can be well used to identify the type of problem, buzzing sounds can be handled at home if the fan is the problem. But if you get clicking and rattling sounds, take it to a service center asap.