The popularity of Alexa has been on the rise since its launch back in 2014. Today, millions of households have at least one Alexa device and many also have smart homes which can be operated with simple voice commands.

The voice activation setting of Alexa is probably the most convenient feature of the virtual assistant. It has a built-in microphone and speaker and can recognize your voice.

This convenience however opens up the possibilities to the downside which is if you can use Alexa to spy on someone or not by recording a conversation or by dropping in on someone without them knowing.

Some Alexa devices such as the Echo Show also have cameras so the sinister possibility of someone manipulating that to spy on someone with Alexa always remains.

But is this possibility a reality though? Let us find out!

Does Alexa Spy on you?

Alexa is not designed to spy on you. Its functions are specific – answer questions, play music, tell jokes, etc. It is not programmed to record your conversations automatically or to eavesdrop on you silently.

But according to some reports over the years, Alexa may be spying on you. Have you ever opened up a social media site and got ads for something that you were just talking about in the morning? If this happens once or twice, it can be ignored as a coincidence but users have reported that this keeps happening multiple times.

This can mean only one thing- your smart virtual assistant Alexa is listening to you and using your voice to infer your likes and preferences in order to give you targeted ads of stuff you might want to buy. This is called ad-targeting and this phenomenon has become smarter over the years as the internet keeps showing you ads of uncomfortably specific items that you may have mentioned loudly, in passing.

While this seems like a harmless way in which Alexa takes your private data but remember that it is also being shared with advertising partners and data from thousands of people generate ad auction bids. The company then builds a profile on your likes and preferences to send you targeted ads. This implies that Amazon may be profiting from sharing your private data.

Can you use Alexa to spy on someone? 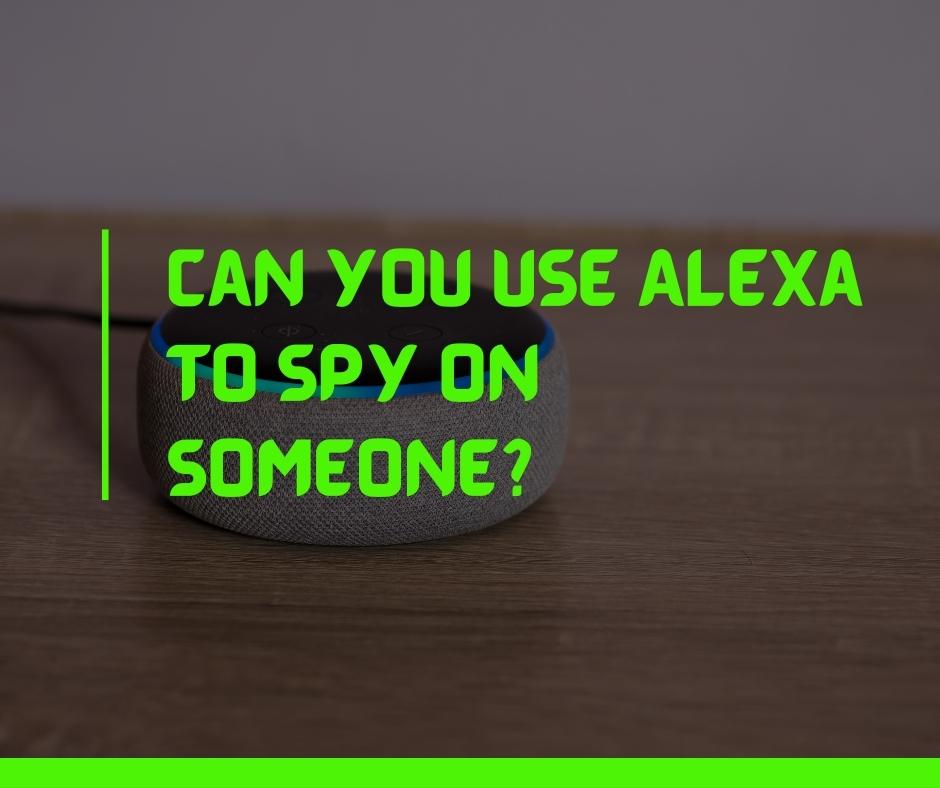 Theoretically speaking, no, Alexa cannot be used as a recording device for audio and video in order to spy on someone. The only possible way is to use the drop-in function but that too cannot be used unless the person on the other end approves your request to be able to drop in on their device.

But the thing is, humans are unpredictable and their intentions may change. You might have allowed access to someone to drop in on your device and they can use it to spy on you if you are not careful enough.

Similarly, this very same drop-in feature can be used to transmit a video feed to you from devices that have cameras. The good thing, however, is that whenever someone drops in on your device, you will be alerted to the fact by a distinct ringing sound and flashing of green light. This alert notification continues for as long as the drop-in is on, so you are very likely to notice it.

Can someone listen to you through Alexa? 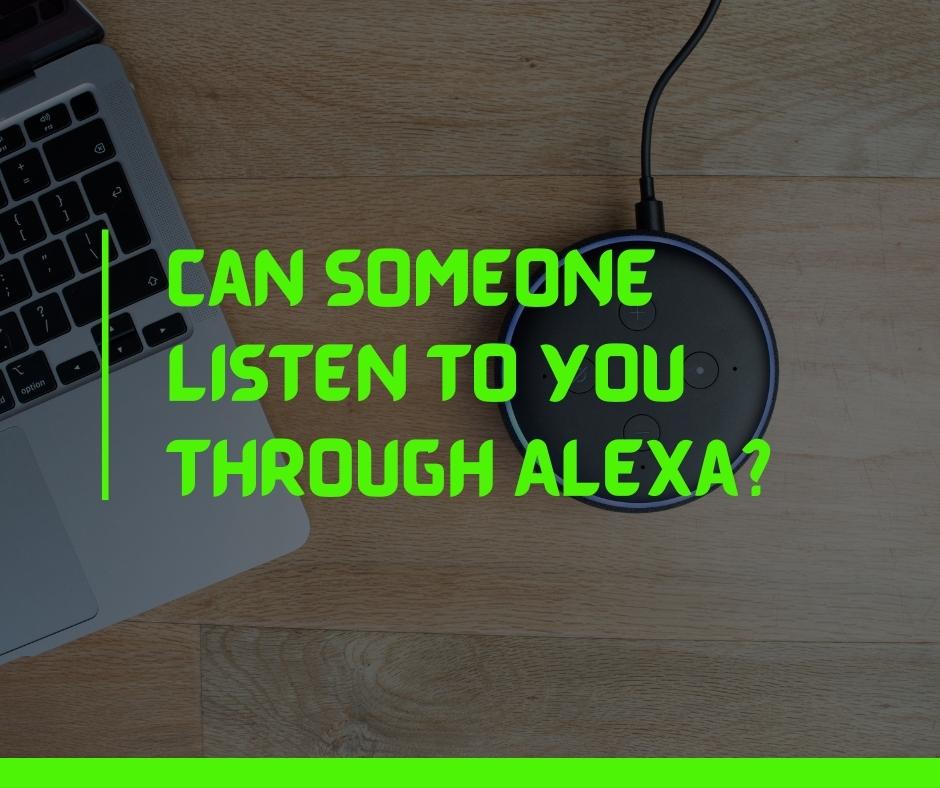 Yes, one can very possibly listen to you through Alexa. How you wonder? Well, as mentioned above the drop-in feature on Alexa enables users to listen to conversations from places they are not physically present. This of course cannot happen randomly and is possible between two Alexa-enabled devices that have to be set up in order to accept drop-in requests automatically.

So rest assured, strangers cannot listen to you through Alexa. The drop-in feature kind of establishes a temporary intercom between the two concerned devices and people from both ends can speak into it and communicate. So not only can someone listen to you through an Alexa device, you can listen and talk to them too.

When the drop-in feature was introduced back in 2019, the reaction was mixed. Some people also expressed concern about privacy issues. But imagine this, you have an old parent at home and need to leave for the office every day. Having a smart home and Alexa-enabled dropping-in activated device will help you check up on your parents from time to time without having them receive the phone every time.

There are countless other scenarios where this feature is actually quite useful. But if someone wants to use Alexa to eavesdrop, the fault hardly lies with the virtual assistant.

However, the drop-in feature does sufficiently notify people when someone is dropping in on their device. If you are within a hearing distance from your device, you are definitely going to hear it.

This feature, however, is not mandatory or irreversible when activated. You can turn it off from the device settings and then turn it on again when needed. You can also curate a list of people from your contacts who are allowed to drop in on you.

Alexa devices that also provide a video feed when the drop-in occurs can be dealt with by tuning on the privacy slide switch which will block the lens from seeing anything and only your voice will be transmitted through the device.

Can Alexa hear my conversations? 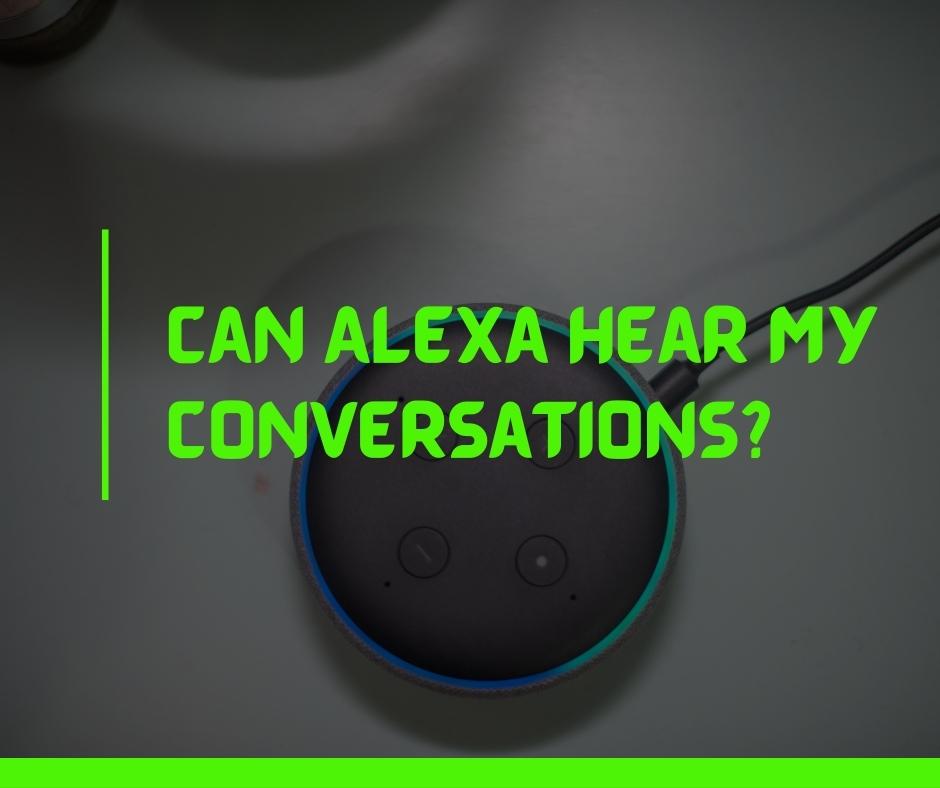 If you are getting targeted ads all across your internet and social media sites then yes, Alexa is listening to you. Ever wondered why Alexa consumes the internet even though it is not being actively used throughout the day? It is because it remains on standby waiting for your command or your question.

Although the company will probably deny this, Alexa does use your voice and conversations and use it to profile you under a pool of users who have similar likes and preferences as you.

So the question is, if your conversations about brands and goods are getting shared, what else compromising information is getting shared and whether or not the company will share that for the right price?

In fact, Alexa can not only hear your conversations but also record them. All you have to do is say the Alexa wake word which will bring the device out of its hibernation stand-by mode and record all subsequent conversations taking place around it.

These conversations are stored as audio clips in the cloud and can be retrieved. So, listening to conversations through Alexa is a possibility as you can play the retrieved files using the application.

But the good news is that Alexa does not perform these without proper notifications. While the device is recording your voice, a light will flash to indicate the same. You can also keep both the camera and microphone turned off unless you need it to be sure,

Can Alexa be hacked to listen to conversations?

We have often seen in sci-fi/action/ thriller movies where people get access to sensitive information by hacking into devices located near certain people. Unfortunately, this is not so far from reality as cyber security is becoming a real concern these days.

There have been many cases where Alexa Echos got hacked and researchers have also been able to pinpoint how. So, yes, your Alexa can be hacked by someone to listen to your conversation without you knowing. Hacking into your device will enable the perpetrator to operate it remotely so you should look out for Alexa turning on, on its own and out of the blue.

The reason behind this vulnerability is simple because the devices are always online. There is a reason why confidential information of large companies is stored in paper format or in an electronic format that is kept disconnected from the internet. This is because, technically, everything on the internet can be hacked. So your Alexa, which strictly cannot function without the internet can be hacked into and can be used as a spying device.

How to eavesdrop with Alexa? 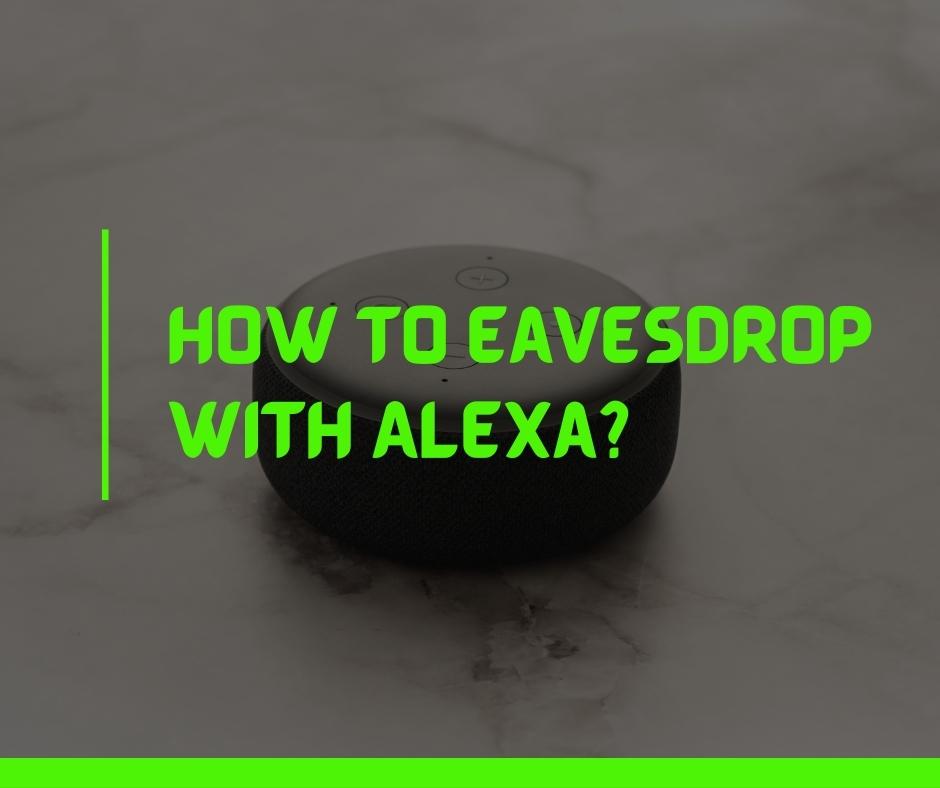 Well, you can use the drop-in feature to eavesdrop with Alexa but as already mentioned, the person on the other end will probably get notified that their device is being listened to. But there are exceptions and humans are not infallible and it is easy to ignore an Amazon echo notification or simply not be in the range to spot it.

First of all, you should not be eavesdropping on people but again, there are exceptions and you may be a parent who wants to check up on their kid past their bedtime to see if they are still awake or not.

Still, unless you are a hacker who can alter the settings of someone else’s device, there is logically no way to eavesdrop on someone ethically without notifying them. What you can do is turn down the volume of the Echo device so when the drop-in occurs and when the device emits its notification ringing it will be at its lowest possible volume.

So, while Alexa does pose a security threat to people, just anyone can’t eavesdrop on a stranger. Because of the device, you are dropping in on has to still list you as a contact for you to drop in. There is no conspicuous way to eavesdrop using Alexa and neither should there be.

So, to sum up. The only way for a third party to gain access to your private information using Alexa is to hack it and control it. This still does not erase the fact that Alexa is vulnerable to hacking and also is very possibly sharing your information with advertisers. It is best to watch out always and stay alert and safe.